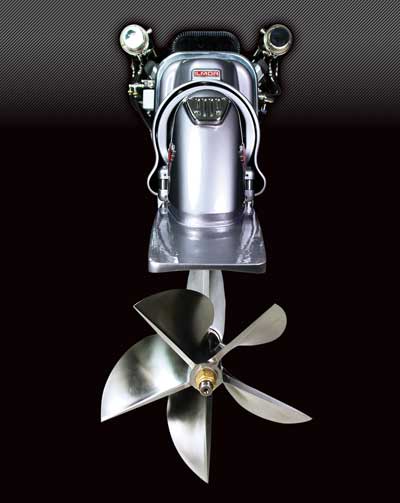 You might have missed this—Ilmor Marine limited the release of this news to its Facebook page and word-of-mouth during the Super Boat International Key West Offshore World Championships in November—but Ilmor is offering a retrofit kit for its Indy stern-drive. That means that owners of Ilmor’s Generation III 550-, 625- and 710-hp engines can replace their existing drives with Indy units. So now owners of boats with Generation III Ilmor power can have complete Ilmor propulsion packages.

“We introduced the kit very quietly because we’re not expecting a huge rush of orders,” said Paul Ray, the president of Ilmor, earlier this morning. “We’ll make it very much more public as we go through the boat shows and poker runs in 2010.”

That leads to an obvious question: Does Ilmor plan to offer a kit that will make Indy drives compatible with powerplants from other high-performance engine builders?

“Not at this stage,” said Ray. “We’ll take a very long, hard look at that in the future, but at this point, no. It’s a matter of making sure we protect the good name of the Indy drive. We want to build a reputation around that drive that says it’s a good piece. When you open yourself up to other engine options, you run the risk of someone putting too much power through the drive. The Bravo drive, for example, gets a bad rap because of that. It’s a good drive, but it was never meant for 800 horsepower. We don’t want that to happen to the Indy drive at this stage.

“If we were to make a move like that, we’d probably go work with Bob Teague (owner of Teague Custom Marine, a noted engine shop in Valencia, Calif.),” added Ray. “That way, Bob could sell the Indy drive with his engines and we’d have some control.”