With the pilot phase of its in-house Gen III engine power upgrade program complete, Ilmor Marine is now offering the program to its entire customer base. That means Ilmor customers who currently own the company’s Gen III 550-, 570- and 625-hp engines will be able to upgrade those V-10 engines to 700 hp for “one-third to one-half of the cost” of a new 725-hp Ilmor Gen IV engine. 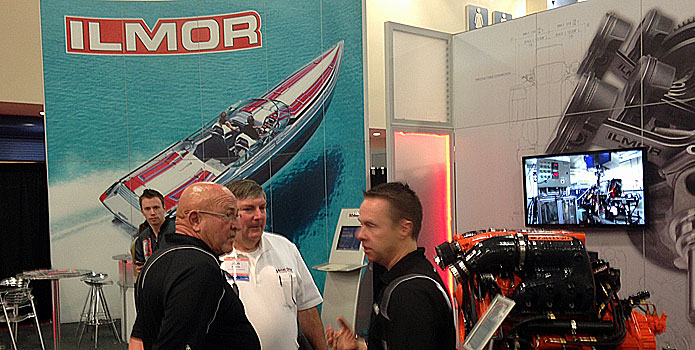 “It’s a great opportunity for people who love their boats and want to put new life into them,” said Jessica Gamarra, the company’s director of marketing, during the recent Miami International Boat Show. “Let’s say you have a couple of 625-hp Ilmor Gen 3 engines. Ilmor could upgrade those to 700 hp, and with a twin-engine platform you’re looking at 150 more horses.

“We floated this out there to a few of our customers and it’s been a pretty successful little program for those ‘in the know,'” she continued. “Now we’re ready to make it less exclusive and offer it to all of our customer base. There are about a half dozen or so of these upgraded Gen III engines in the field now, and everybody is really happy with them. We wanted to make sure everyone was happy and satisfied before we opened up the program to everyone.”

Each refreshed and upgraded engine comes with a six-month warranty from Ilmor Marine, which does all the rebuild work, with the exception of engine removal and reinstallation (that’s handled by individual Ilmor dealers), in house. In addition to the upgrades, Ilmor repaints and tests each engine on a dynamometer after the work is complete.

Gamarra explained that the program’s rebuild/repower price varies with the condition of each engine Ilmor receives. Most, she said, are in “great shape” even with hundreds of hours on them.

“There are a lot of them still running—it’s difficult to get people to turn them in,” she said. “Our Gen III engines were turnkey, reliable packages and people love them. But the cost of upgrading their current power is substantially lower than buying new—and let’s face it the marine industry isn’t fully recovered yet—and you end up with something that feels like a whole new boat, with a 180-day warranty on the engines.

“The other nice thing is you get a lot more horsepower in the exact same engine envelope,” she added. “You don’t have to change exhaust or engine mounts, or anything like that.”