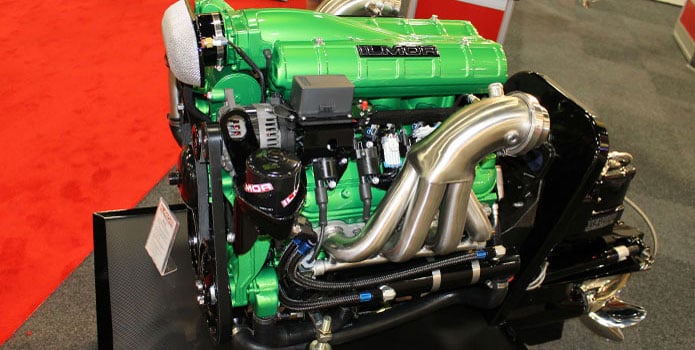 Introduced at the Miami International Boat Show last year, the MV8 570 engine from Ilmor Marine will be in new high-performance powerboats by early to mid 2013. That’s the word from Paul Ray, the president of the Plymouth, Mich.-based engine company.

“We’ve talked to every high-performance boat builder who’s still in business, and there’s a lot of interest out there,” said Ray. “Some guys have said they will take them straight away, others will wait until they have a customer for them. It’s the same overseas—we have quite a lot of interest in the engine overseas.”

The company originally planned to introduce the 570-hp, 7.4-litre LS-architecture-based small-block this summer (read the story) but opted for more development, testing and validation in the engine’s 30-foot Eliminator Eagle V-bottom test bed. The decision to delay the release, said Ray, had as much to do with the state of the high-performance powerboat industry as anything else.

“It’s been a bit of a slow walk, but we’re still progressing steadily along the path of development,” said Ray. “It would have been nice to bring out the engine earlier, but to sell ten in a year wasn’t something we were in a great rush to do. We felt it was better to get the development completely finished and get through emissions. Plus, we still had to get deals done on stern drives from Teague and IMCO. 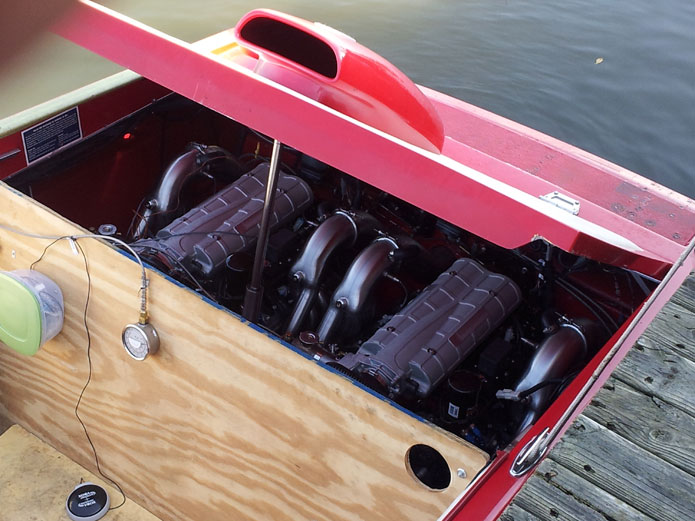 “We are very confident people will accept the product once we have it right,” he added. “And we want to be sure that when we do introduce it, we don’t introduce a whole bunch of warranty headaches.”

Ray said that testing and validation of the engine have—in addition to extensive dynamometer testing—included everything from starting on cold and hot mornings to low-speed drivability and high-speed (engine and boat) performance. Meeting Environmental Protection Agency and California Air Resources Board emissions regulations has not been a problem. Getting the engine to meet European Union (EU) emissions standards, he added, has been much more challenging.

“We absolutely want this engine to have an international appeal,” said Ray. “We easily passed the U.S. standards in testing, but the European standards are more difficult. But the engine will pass them.”

At present, there are 160 catalyzed, 522-hp versions of the upcoming non-catalyzed MV8 570 engine powering MasterCraft towboats in the field. The Ilmor towboat engine is based on the same 454-cubic-inch LS platform as it high-performance version.

“That’s been a tremendous proving ground for us,” said Ray. “We have engines out there with 850 hours on them at some of these waterski and wakeboard schools. Some of these schools put ungodly hours on the engines, and they are tough hours. You get a MasterCraft X-Star with 4,000 pounds of ballast and ten guys going from zero to full throttle, then back to half throttle and then back to idle when the wakeboarder falls, and it makes for a severe duty cycle and a great testing ground.”

Pricing for the Ilmor MV8 570 engine with either a Teague or IMCO drive has not been finalized. “The price will be comparable to that of engines of similar power,” said Ray.