Joining a pair of stunning Rockit V-bottoms—the 39-footer and 29-footer—from Hustler Powerboats at the Miami International Boat Show were a couple of new entry-level focused models from the New York-based company. 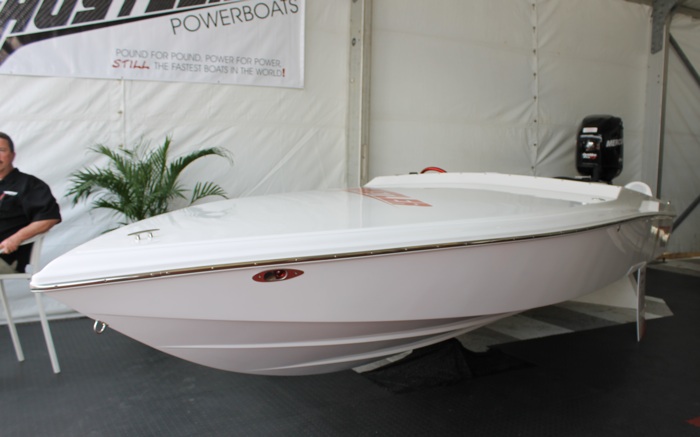 Hustler Powerboats showed off its new entry-level PT221 sportboat at the Miami International Boat Show.Both models caught our attention upon walking into the booth to talk to owner Joe LoGiudice and his nephew, Paul. First was the single-engine PT221, which was equipped with a Mercury OptiMax 200 Pro XS outboard but also is available in a stern-drive package.

The simple and clean 21-footer starts at slightly more than $70,000 and features the company’s Rockit deck technology. It includes two bucket seats and a rear bench, and is set up for skiing with a ski tow-eye and a sizable ski storage compartment.

Quite different and even more unique, Hustler had its prototype 288 center console model on display. The boat features a deep-V hull, extra-wide gunwales and abundant storage space ahead of the spacious center console, which has more than 6 feet of headroom.

The not-quite-complete 28-footer was only assembled a few days before the Hustler crew left for the Miami show. One thing that was very unique about the model was the rigging of the twin Mercury Verado 200 engines on the transom. Not only did the engines raise up to a near horizontal position, but rather than installing a rubrail where the hull and deck met, the company overlapped the deck to protect the transom from any water intrusion.