As expected, Hustler Powerboats finished its first 288 Center Console before the end of the summer, and the unique 28-foot boat is now ready for public consumption. According to Paul LoGiudice, Hustler’s vice president of marketing and sales, the company will be displaying the new model at the Norwalk Boat Show in Connecticut next week (Sept 20-23).

Hustler Powerboats has its new 288 Center Console running 50 mph with a pair of 200-hp outboards.

“The Norwalk show is primarily for fishermen—there’s not much high-performance stuff there,” LoGiudice said. “Since this is our first attempt at building a fishing boat, we’re not sure what to expect. We’re quite interested to see what happens at the show.”

LoGiudice said the 28-footer, which was on display at the Miami International Boat Show in February, runs right around 50 mph with a pair of Mercury 200 Verado outboards providing the power. He described the nearly 6,000-pound boat as a nice little fishing boat, adding that it has more than 6 feet of headroom in the console and all the fishing-related features you need from stainless-steel rod holders to salt- and freshwater systems for the holding tanks. 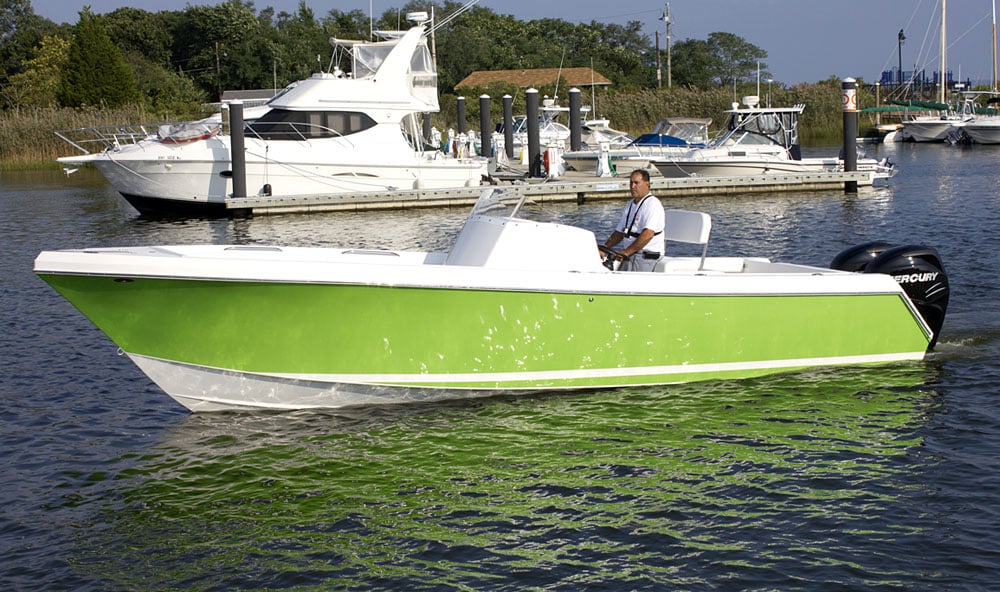 Hustler owner Joe LoGiudice brings the 288 Center Console back to the docks after a test run.

“We’re pleased with how the boat runs,” said LoGiudice, adding that this was Hustler’s first real attempt at an outboard-powered boat so he was surprised with the low noise levels the engines produce. “It’s rock solid and it plows right through everything.”

On a side note, Hustler expects to have some testing completed on its 39 Rockit offshore V-bottom with twin Mercury Racing 1100 engines in the next couple of weeks. Speedonthewater.com will have the details once they are available.