The good news is that Washington performance boaters Jason and Laurie Moe are going to get to enjoy what is sure to be an unforgettable Miami International Boat Show debut of their new carbon-fiber 46-foot catamaran from the team at Outerlimits Offshore Powerboats in Bristol, R.I., in exactly three weeks.

Jason and Laurie Moe’s SportChassis is ready to take its cross-country trip to meet up with its tilt trailer in Michigan and its new 46-foot Outerlimits catamaran in Rhode Island before heading south to the Miami International Boat Show. Photo courtesy Jason Moe

The bad news is that I didn’t do my job and provide updates as promised on the site. My apologies to you all and the Moe family, who have been so respectful and supportive of speedonthewater.com over the years. Just take a closer look at the SportChassis that was built to haul the canopied 46-footer on a tilt trailer built at Skater Powerboats in Douglas, Mich. Yep there’s a Speedonthewater.com logo on there—incredible.

At the same time, I guess it’s pretty cool that the cat, which at the moment is in Rhode Island being rigged with its twin Mercury Racing 1550/1350 engines, is going to be relatively unseen before the show spotlight at the Miami Marine Stadium docks. At least I have a few teaser images to share courtesy of the talented painter behind Stephen Miles Design in Kentucky, which the Moe family enlisted to design and apply the graphics that feature a track element recognizing the family excavating business, Elk Heights Excavation in Maple Valley.

Earlier today I caught up with Jason and Laurie, who had commissioned Outerlimits to build two V-bottoms, both named Hurry Up, before purchasing their new cat, also named Hurry Up, and they both said they couldn’t wait to see the boat in Miami. Give you one guess which one was more excited.

“I’m excited for sure—Outerlimits always does a great job and I think this boat is going to be one of a kind—but I’m even more excited because of how excited Jason is about it,” said Laurie Moe, whose father, Steve Jones, died in a boat racing accident in Soap Lake, Wash., in 1981. “Jason is just a big kid at heart. He and my son, Colton, who is 14, are like the same age. I’m kidding of course, but there’s never a dull moment when you’re married to Jason Moe.

“I’ve been around boats my whole life; my family is in the luxury yacht business and my dad built and raced Starfire flat-bottom boats,” she added. “I love boating. I grew up going to races with my parents, and somehow, without boating involved, I ended up meeting and then marrying a speed freak.”

Laurie laughed and explained how she met Jason when she was driving a 550-hp CAT dump truck and was introduced at a job site. She said Jason asked her to marry him before he even asked her on a date. The rest is history as the two hard-workers have built a successful business that has allowed them to enjoy performance boating across the country in their free time. As Laurie said, “We move the earth so we can fly across the water.”

For more teaser photos of the 46-foot Outerlimits, check out the slideshow above and click the image below to enlarge.

For more teaser photos of the 46-foot Outerlimits, check out the slideshow above and click the image below to enlarge. 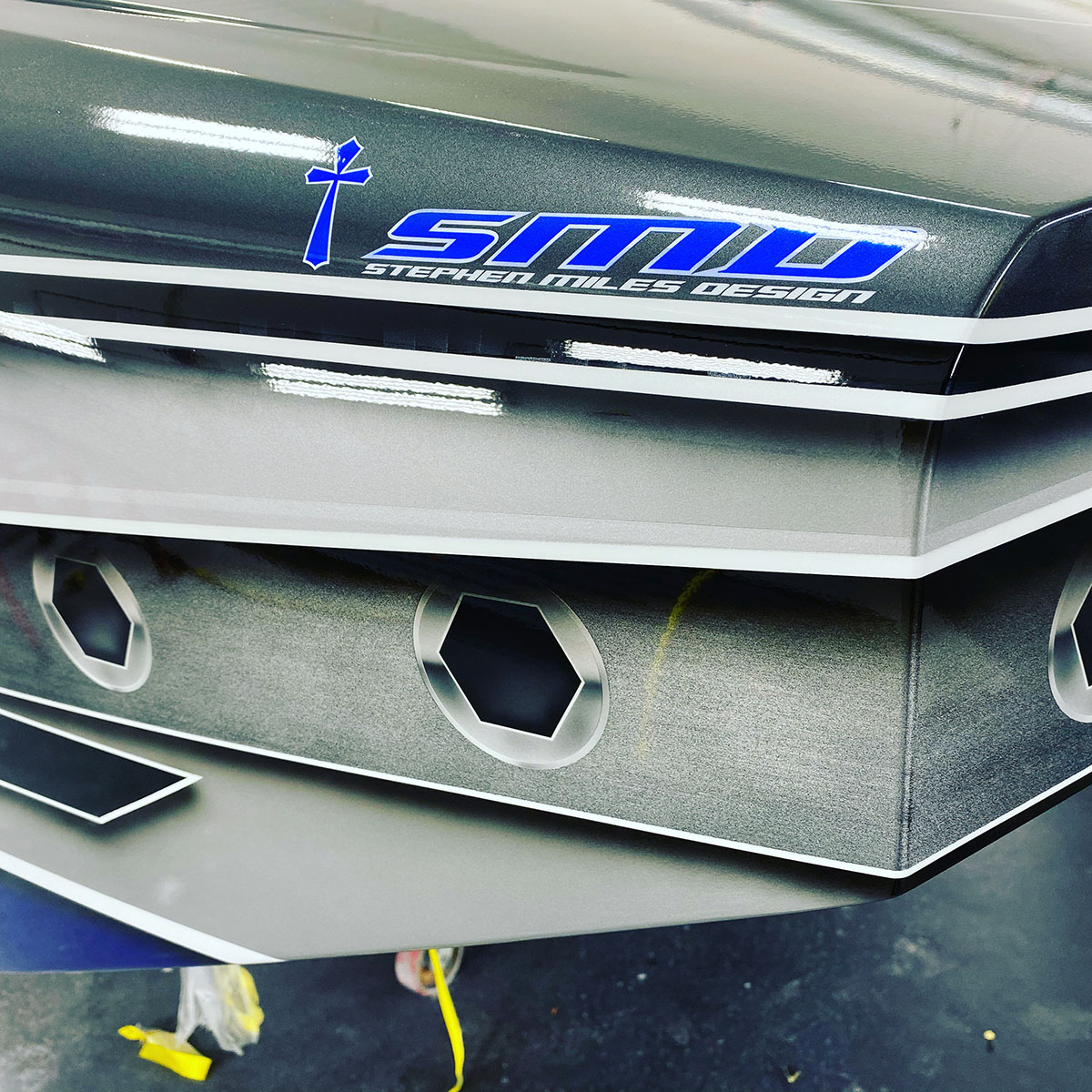 Jason and Laurie More are proud that both their son and his older sister, Katelin, who as usual will be by their side at events this summer such as the Boyne Thunder Poker Run in Michigan, the Erie Poker Run in Pennsylvania, the Key West Poker Run in Florida and more, have their Washington State Boater Education Card.

“I read that article about whether kids should go to boating events and my perspective is that they should be there because boating is a family affair and because my kids are the future boaters,” Laurie said. “In my opinion, it’s all about the parenting. My kids earn their keep and they are prepared to help. They have responsibilities as part of the team, and they embrace the opportunity. They’re also very respectful. We wouldn’t have it any other way.”

Jason said his kids are very hands-on being that they grew up around machinery and heavy equipment. He’s also proud that they know how to drive a boat.

“Outerlimits has taken great care of us,” Jason said. “There’s no doubt this is going to be the best Outerlimits I’ve owned. This is also the best experience I’ve had—the management there has really impressed me. Between the paintjob, the interior and all of the attention to detail, this boat is going to be a showstopper.”

Jason said he has plans to go “very fast” in Hurry Up, which he said has been finely crafted to save as much weight as possible. And when he does, legendary throttleman Steve Curtis, who famously ran the Spirit of Qatar Mystic Powerboats catamaran 244 mph at the Lake of the Ozarks Shootout in Missouri more than five years ago, is going to be by his side.

“I’m going to learn to drive a cat from the best,” Jason said. “Between Steve, who I have contracted to do four poker runs and 25 hours of seat time in the boat with me, and my friend Bob Teague of Teague Custom Marine, I have some experienced teachers. Anyone who knows me knows I want to be very good and very safe at anything I do.”