Surely last week’s devastating superstorm, Hurricane Sandy, has affected many people in and around the boating community. In one instance, the extratropical cyclone that moved ashore in New Jersey and caused severe damage to the Northeastern United States left a glaring effect on the offshore racing community preparing for Super Boat International the Key West World Championships. 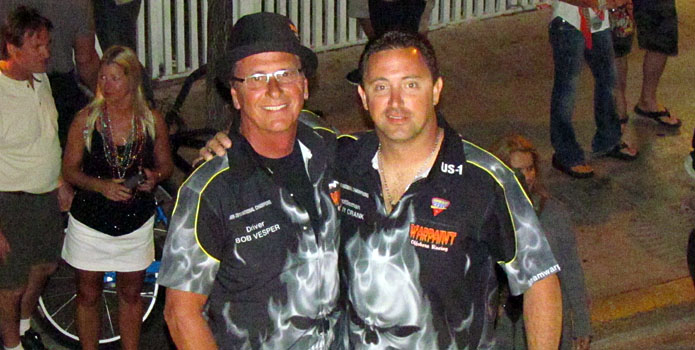 Veteran throttleman Danny Crank, who was supposed to join Team Warpaint owner/driver Bob Vesper in the team’s new race boat this week and provide support for a Ukrainian-based team, had to stay home and pick up the pieces left behind by Sandy. Crank, who was in the early stages of his new US-1 Performance Marine, a rigging and service business for race and pleasure boats in Morgan, N.J., said his facility was destroyed.

“It’s just as bad as you’ve seen on TV,” Crank told me this morning after spending the weekend shoveling out the shop, which had up to five feet of water in it. “Obviously I’m not going down to the Keys. I got hit pretty hard here. Bob is still going down with Team Warpaint—he’s putting someone else in the boat to run with him—unfortunately the Ukrainian Spirit boat is pinned in at my shop so that boat won’t be racing in Key West either.”

Crank doesn’t think he’ll watch the live streaming of the races—he said it makes him sick to his stomach that he’s not there—but he will stay in touch with Vesper and the team to find out how everything is going. In the meantime, he’ll keep plugging away at cleaning up the shop, which is located on the Zuback’s Marine property and offers a ramp, crane and easy access to Raritan Bay.

Although he had already moved engines, tools and more into the building, Crank said he’s grateful that he didn’t start the build on the US-1 Performance Marine engine dyno room before the storm rolled in. Now, his goal is to get at least one bay up and functioning in the next couple of weeks and move forward from there.

“There will be a bit of a recovery period for sure,” said Crank, who was actually at the shop during the storm trying to save boats and tie them to the buildings. “In the 75 years this marina has been here, our building never had water in it before. I thought everything would be high enough and dry enough but that wasn’t the case. I mean we had boats in the marina that washed up against our building. That’s how the Ukrainian Spirit boat got pinned it.”

Crank didn’t ask for help, but because I know how big-hearted the boating community is, I wanted to include Crank’s phone number (609-994-4034) and email in case anyone would like to assist with his rebuilding efforts.

An Afternoon With Team Gasse

Speedonthewater.com Interview To Be Featured During Key West...