The new 28 SDS from Howard Custom Boats is less than a month away from being finished.

In 2010, Howard Custom Boats introduced its 28 SCS, a sporty catamaran that utilized a modified version of the company’s popular 28 Sportdeck hull and a completely redesigned deck. In about a month, the Valencia, Calif., builder should be finished with the sister ship to the 28 SCS—an updated version of the 28 Sportdeck dubbed the 28 SDS.

According to Mike Willen, who designs and builds the company’s boats, the 28 SDS will offer all the amenities of its current 28-foot deck boat, as well as the ability to go fast without wind in your face thanks to the wraparound-style acrylic windshield.

“We decided to build the 28 SDS for a couple of reasons,” Willen said. “First, we had some customers who added windows to our 28 Sportdeck, and after testing them, it was pretty nice to be behind a windshield at higher speeds.

“The other reason was we and our customers really liked the look and feel of the new 28 SCS in which you sit lower and are well below the windshield so you look through it not above it,” he continued. “So by taking the good things about both models, we were able to come up with a new model that has the feel of the sportier SCS and the amenities and ease of use of the Sportdeck.”

For Willen and company, the 28 SDS, which has an option for either a full rear bench or a three-quarter rear bench with a walk-through, is a refreshing project.

“I am excited about this project because design and tooling is what I like to do, and in this economy, that has slowed drastically,” Willen said. “We are just finishing up the rear walk-through and hatch, and we should have a complete boat in about one month.”

As with all boats from Howard, the 28 SDS is fully customizable. The base model features a MerCruiser 8.2 Mag HO. Standard features include a bow walk-through, two slide-out 48-quart coolers, a freshwater sink and front and rear wash down showers.

For more information, check out www.howardboats.com. 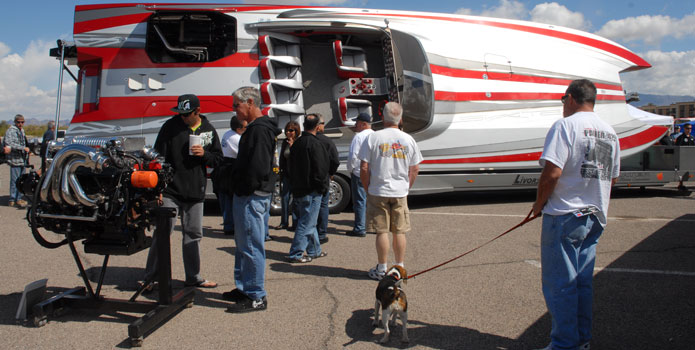