Your go-to source for performance boating.
HomeCommentaryHot Stuff: ‘Pegged 2 The Movie’ is Here

I, as well as many of you, couldn’t wait to get my hands on a copy of “Pegged 2 The Movie,” the follow up to the 2005 full-length DVD documentary focusing on the boating lifestyle in and around the Colorado River. When I spoke to Chris Cooley, director and producer of the movies, in February, he was getting to close to wrapping up the action-packed high-definition film. A couple of months later and Pegged 2, which is presented by Teague Custom Marine, arrived at my house along with the other pre-orders Cooley shipped out after receiving his first run of DVDs. 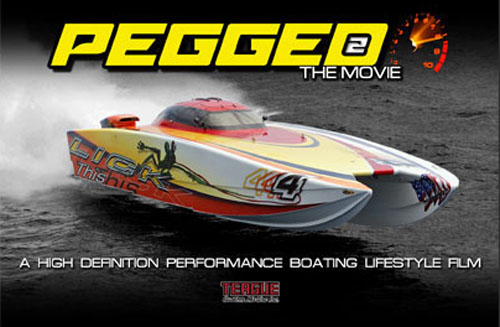 “Pegged 2 The Movie” is now available at peggedfilms.com.Cooley, who owns CCR Sport, which manufacturers motorcycle transport parts and truck accessories in Costa Mesa, Calif., told me that he was relieved to have the movie finished. He plans on showing it off—and selling it—to the masses at the Desert Storm Poker Run in Lake Havasu City, Ariz., in a couple of weeks. Of course you can order it online at peggedfilms.com.

I don’t want to spoil anything when it comes to the fast-paced footage and hair-raising sounds that accompany Pegged 2, but I can tell you that from the introduction and the segment on Desert Storm to the V-Drive Regatta on Irvine Lake and the chapters dedicated to DCB’s new M41 Widebody and Sean Moore’s Lick This Skater Powerboats catamaran, I was captivated by the video quality and timely editing. The amount of footage that Cooley and company collected from the ground, in the air and from cameras mounted on boats was impressive. 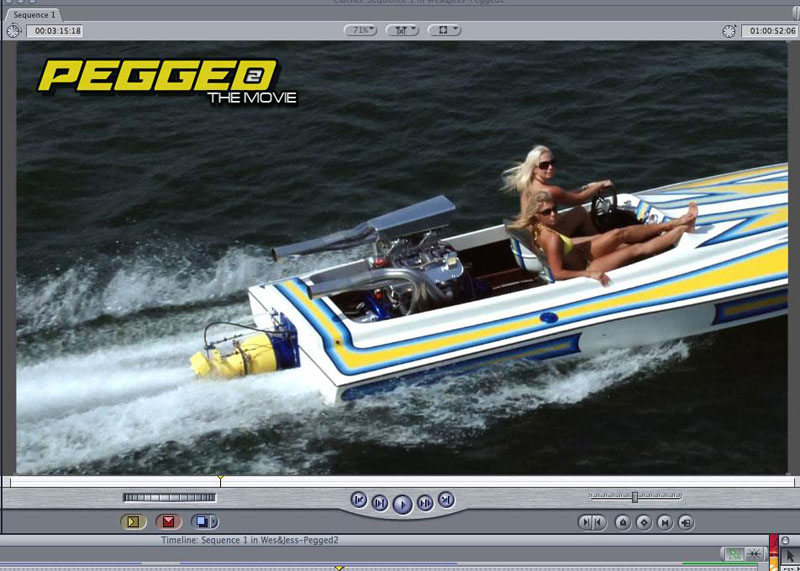 The Wes & Jess chapter is a highlight of Pegged 2.Being the rock ’n’ roll fan that I am, I appreciated the music Cooley went to the effort of licensing and choosing to go with each segment. For a minute I thought the Desert Storm segment was going to be my favorite one considering the footage from the street party and the start of the poker run, but then I met Wes and Jess, two gorgeous blondes spending the day running a classic Eliminator along the Colorado River in the breathtaking Gorge north of Lake Havasu. Yes, it’s as hot as it sounds—and looks (left).

Overall, Pegged 2 definitely got me revved up for summer. I’d recommend it to any fan of the boating lifestyle, whether you’re into offshore boats, flat-bottoms or just hanging at the sandbar. Along with the 13 chapters, the 40-minute film includes a lot of bonus features—my favorite was the one called Unplugged, which takes the music out of the equation so you only hear the sounds of the boats running. Cool stuff for sure.