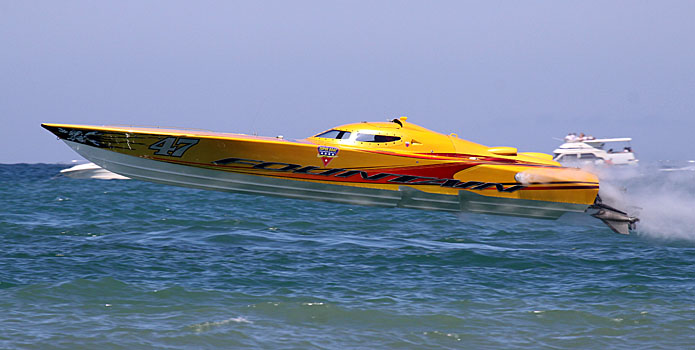 It had to be more than five years ago now, but the conversation is still vivid. Photographer Paul Kemiel called with some “very exciting” news to share, at least according to him. Kemiel, who has been shooting boat racing for more than 30 years, informed me that his hometown of Michigan City, Ind., would be hosting an offshore race in the summer of 2009—early August to be more precise. He sounded animated and passionate about the potential turnout by both race boats and spectators.

Not quite sure how a race in Lake Michigan off the Indiana shoreline would be received, I agreed to share the news with our readers and asked Kemiel if he would provide post-race coverage of the Super Boat International (SBI) event for Powerboat magazine. He ended up writing a great article that tied in his personal connection with the event’s successful debut and the impact it had on the local economy.

Kemiel, the event’s official photographer, is as excited today about the fifth annual SBI Great Lakes Super Boat Grand Prix coming up in early August as he was back then. Never in his wildest dreams did he expect to be covering an offshore race in his own hometown. Outside of the economic stimulus a long weekend of offshore racing brings to the community—Kemiel said it was estimated between $6 and $7 million last year—the best part is that the Hoosier State, more specifically the LaPorte County Convention and Visitors Bureau (LPCCVB), proved it could put on a good show. Not only has the event delivered hundreds of thousands of spectators to Washington Park Beach for the racing, boat parade and Taste of Michigan City block party, it has also become a favorite among many racers.