With a goal of having two boats to race in upcoming Ocean Cup Series races this season and beyond, Lucas Oil/SilverHook offshore racing teammates Nigel Hook and Jay Johnson announced they have purchased a Mystic Powerboats C5000 catamaran—the former green and silver canopied cat known as Envy and owned by New Yorker Chris Cox, who took delivery of the 52-footer in early 2014.

The Lucas Oil/E3 Batteries A77 Mystic catamaran is expected to be ready to race in the Huntington Beach Around Catalina Ocean Cup Series race in early October.

According to Hook, a decorated veteran offshore racer, the cat is going to be set up for endurance races and wrapped in new Lucas Oil/E3 Batteries A77 livery designed by No Coast Design in Indiana . Powered by twin Mercury Racing 1550/1350 engines, the boat, which has a Union Internationale Motonautique length of 45 feet, is going to complement the team’s Lucas Oil 77 SilverHook Powerboats 48GP that’s also powered by twin Mercury Racing 1550/1350 engines.

“Jay and I have been racing together for a long time and always in V-hulls, so we’re looking forward to adding a cat to the team,” said Hook, who can’t wait to start testing the boat after team crew chief Herb Stotler of Stotler Racing & Custom Marine in Gainesville, Ga., looks everything over. “This is a great boat for Ocean Cup. It has a lot in common with our SilverHook V-bottom, but the main factor in making the decision to purchase it was that Herb Stotler had rigged, raced and taken care of it from birth. Everything has come together with our new associate sponsor E3 powering our track to future technology and joining our longtime title sponsor Lucas Oil.”

Hook, who has maintained what’s arguably the longest running sponsorship in the sport with Indiana-based Lucas Oil, is excited about the team’s new associate sponsor, E3 Batteries, a division of E3 Spark Plugs in Ponte Vedra, Fla. As is the team behind E3 Batteries.

“All of us here at E3 are extremely excited to be partnering with Nigel and the SilverHook racing team,” said Rob Fisher, vice president of Motorsports & Business Development for E3 Spark Plugs. “Not only is he a legendary world champion racer and world record holder, but Nigel is a true innovator who embraces new technologies. That makes him the perfect spokesman for our new line of ultra-lightweight E3 Lithium Batteries.

“From our initial conversations, Nigel instantly recognized the benefits of switching from the hefty AGM batteries he was running to the 8.9-pound E3 Lithium Marine Battery,” he continued. “And with three batteries on board, he is saving the equivalent of a whole person. I’m trying to convince him with all that extra weight savings he could afford to add a navigator to the team to enhance their chances at victory. I will unapologetically throw my hat in the ring for that role.”

Because the boat has room for five people with three seats behind the driver and throttleman seats, Fisher may just get that chance in an upcoming test session or possibly in a race.

Hook and Johnson, who is just as excited as Hook is about competing in the Ocean Cup Series race from Huntington Beach Around Catalina Island and back in early October and future Ocean Cup events, feel like the boat is going to be perfect for longer endurance runs with a fuel capacity of 400 gallons and a hull designed to handle offshore conditions.

“I’m happy to have her back in the shop,” said Stotler, who has rigged and maintained the boat, which was originally powered by twin turbocharged Stotler engines, from the beginning. “I’m also happy to have her in the hands of a race team that will prove the boat’s full potential. I think the  boat is going to be perfect for Ocean Cup races in rough open seas.”

For more information on the Ocean Cup races, visit OceanCup.com. 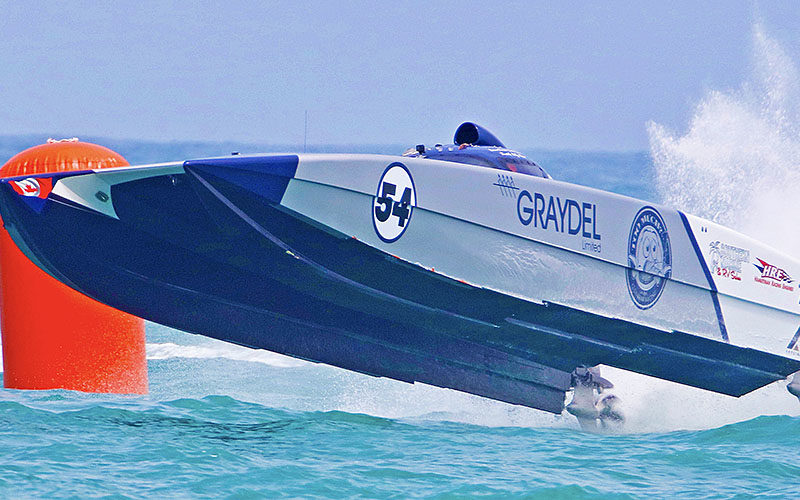 Leaving No Doubt: APBA National Championship Series Opens With A Bang In Cocoa B...