Tyler Miller, owner of the M CON entry in offshore racing’s Super Cat class, was elated after finishing second a couple of weeks ago in the rough conditions at Thunder On Cocoa Beach, the first event of the 2022 American Power Boat Association Offshore National Championship Series in Cocoa Beach, Fla. Then on Saturday, he and driver Myrick Coil returned to their home waters—Missouri’s Lake of the Ozarks—to dominate the finale of the 2022 Donald Campbell Design Build Lake Race, running away from the Super Cat class in the team’s new 38-foot Skater Powerboats catamaran.

“The boat felt amazing.,” Miller said. “We spent five or six hours testing on Tuesday working on getting the acceleration we wanted. We wanted to put our best foot forward and we got the setup right.”

Almost as happy as Miller and Coil was the second-place team of driver Simon Prevost and throttleman Vinnie Diorio in their 39-foot Outerlimits, SV Offshore, which is the only boat in the Super Cat class powered by twin 860-hp Mercury Racing engines.

“That’s a win for our team,” Diorio said of the second-place finish. “We’ll take that all day.”

Because the rest of the boats have 750-hp engines, Diorio and Prevost have to carry an extra 750 pounds, which has proved to be challenging in terms of setup. Coil, who is the service manager at Performance Boat Center, the Lake of the Ozarks-based facility that services the SV Offshore boat. The team’s crew chief, Greg Hillmer, works at Performance Boat Center as well, and Coil took Diorio and Prevost for separate rides to show them the finer points of how to run the boat.

SV Offshore’s Vinnie Diorio, who owns Rollin Transport out of Wisconsin, was happy with his team’s performance in its Outerlimits.

“It’s the best our boat’s ever run,” Diorio said. “Myrick showed me where to feel it and I was trimming the boat way different than he showed me.”

Added Coil, “We went out and ripped it around and went into some turns really hard, just coaching him and giving him some confidence.”

A Positive Start
The chamber of commerce conditions with temperatures hovering around 80 degrees and light winds provided a flat racecourse for all 43 teams entered in the first race of the Offshore Powerboat Association season. Drawing the inside lane proved to be a major factor in all but one of the day’s five races on the course that covered a little more than 4.5 miles.

In the first race of the day in the Bracket 700 class, the Jackhammer team of Julian Maldonado and Brian Guy took the flag-to-flag victory in their 21-foot Superboat powered by a Mercury Racing 300R outboard engine. Second place went to Goofin’ Around, with Punisher claiming third, unofficially. Additionally, 15-year-old Dominic Stancombe made his debut behind the wheel with his father and throttleman, Micheal Stancombe, in the 21-foot Challenger, Ella’s Nightmare.

The Bracket 700 class victory went to the Jackhammer team in its new 21-foot Superboat.

The next race featured three Stock V boats and the four teams in Bracket 500 class, so the elder Stancombe jumped out of his family’s boat and into the 30-foot Phantom, Team Woody, to race against the other Bracket 500 class teams.

When the green flag flew, OPA president Ed “Smitty” Smith and his son, Anthony Smith, jumped to the lead of the Stock V race in their 30-foot Phantom, Wazzup, opening up a big lead over the second-place boat, Shocker, another Phantom. An earlier-generation 30-foot Phantom, Myrtle Beach RV Resort, held third position and the three maintained those positions until the checkered flag.

Running in an open-cockpit 30-foot Phantom, Stancombe throttled with J.J. Turk on the wheel, and the two jumped out to a lead in Team Woody that it would not relinquish over the DCB Performance Boats hull, Mean Streak, and another 29-foot Warlock, Bulletproof. The Reindl Powerboats entry, Ultimate Boat Racing, brought up the rear.

Thanks to Team Woody and Mean Streak, the Bracket 500-class competition was as strong as ever at Lake Race.

Controlled Chaos
The third race of the day brought the most challenging competition in the Super Stock class, which is made up of 30- to 32-foot catamarans powered by 300-hp Mercury Racing outboards. It was also the only race where holding the pole position didn’t result in a victory. When the green flag flew, the nine boats looked to be holding a deck-to-deck lineup going into the first turn, but it was the rookie team of Julian Maldonado and Dominic Steele in the smallest—and oldest—boat in the fleet pulling ahead and never looking back in the 30-foot Skater, Steele Racing.

With nine equally-matched boats heading into the first turn, mayhem was sure to result. Veteran throttleman Billy Moore was in the cockpit of the 32-foot Doug Wright cat owned and driven by Tanner Lewis, Atlas. Moore said his boat got together with Performance Boat Center/FASS Fuel Systems, which pushed Atlas sideways into another 32-foot Doug Wright, LPC, which pulled off with steering system issue.

“When you have nine to 15 boats going into a turn and they make a sharp turn, there’s going to be incidents,” Coil said.

Initially, throttleman Ryan Beckley and owner/driver Chris Hopgood tried to challenge Steele Racing in their 32-foot Doug Wright, which was locally sponsored by TNT Caddy Shack. Maldonado, Steele Racing’s throttleman, said that once he was able to out-accelerate the competition, he knew he could maintain his advantage.

“We have a rear-view camera and it’s a night-and-day difference,” Maldonado said. “We can see what’s back there.”

The Steele Industries team of Dominic Steele and Julian Maldonado ran a fast race in its Skater to earn the Super Stock-class victory.

After the team dispensed with TNT Caddy Shack, it focused on keeping the 2021 national champions Coil and throttleman Rusty Williams, who were charging hard, in its rearview mirrors.

“I was the crew chief for the Jackhammer (Super Stock team) and we always noticed that Performance Boat Center got faster as the race went on,” Maldonado said. “We did a little bit of blocking.”

For Steele, who is engaged to his throttleman’s younger sister, the Lake Race was his second competition behind the wheel.

“Halfway through the course, I could feel how the boat was working,” Steele said, adding that the duo continued to tighten its line around the buoys to prevent Performance Boat Center/FASS Fuel Systems from getting a look at the inside lane.

Coil and Williams appeared to finish second but were given a one-lap penalty for the first-turn incident, while Maldonado’s father, Ricky Maldonado, and owner/driver Reese Langheim ended up taking second, unofficially, in the 32-foot Victory catamaran, Jackhammer. Third place went to Moore and Lewis in the Atlas boat.

Check out the slideshow above for more images from Lake Race.

Staying on Schedule
OPA officials did a good job of keeping the schedule moving and in the fourth race of the day, the 14 boats in Modified V and Bracket 300, 400 and 600 classes kept the livestream announcers on their toes.

Focusing on the Modified V race, the father-son team of Steve and Stephen Kildahl in the 30-foot Extreme, Boatfloater.com, had the pole position, but it was the team of driver Diorio and owner/throttleman Brian Forehand in the 29-foot Outerlimits, Marker 17 Marine, that charged to the lead and never looked back. The 30-foot Phantom, Punisher, which saw Charlie McCarthy return to the cockpit, tried to catch Marker 17 Marine, as did Ian Morgan and Nick Imprescia in the 30-foot Phantom, 151 Express.

Still, the Outerlimits is fast in calm waters and Forehand and Diorio put the boat into cruise control. Punisher finished second followed by Boatfloater.com.

In the Bracket 400 Class, the 39-foot Velocity, GNS Racing, held out for the unofficial victory over the 36-foot Pantera, Full Send.

In the closely-contested Bracket 600 class race, the 26-foot Scarab, Rum Runners, appeared to claim an unofficially hard-earned checkered flag ahead of Deception and Punchin’ Hulls.

Then the Super Cats took to the course along with the two boats in the 450R Factory Stock class and the lone entry in the Vee Extreme class—the 39-foot Fountain, Knucklehead Instigator. The 450R Factory Stock class had two MTI 390X catamarans, KLOVAR Motorsports, with Randy Keys and throttleman Billy Allen, and Taylor Scism and throttleman John Tomlinson in TS Motorsports.

Tomlinson and Scism jumped out to an early advantage that they held after Keys and Allen spun in a turn.

The two MTI catamarans competing in the 450R Factory Stock class put on a great show for the Lake of the Ozarks fans.

In Super Cat, SV Offshore showed speed that had yet to be seen out of the boat and held on for second place. The 39-foot MTI, Pro Floors Racing, with throttleman Grant Bruggeman and owner/driver Wayne Valder, threw a belt off an engine and had to retire. This left Muller and the returning Mauff to come home in the final podium spot.

With Graydel winning in dominant fashion at Thunder On Cocoa Beach and M CON doing the same at Lake Race, the promise of fireworks in a showdown in offshore racing’s premier class on July 4th weekend in Sarasota looms.

“We should have 9 boats in Sarasota and it’s getting set up to where anybody could win this thing,” said M CON’s Miller, who is the class representative. “It’s anybody’s race and that’s what’s so exciting about this coming year.”

Editor’s note: An earlier version of this story incorrectly stated that the LPC team exited the Lake Race with an “engine issue.” The contact between raceboats actually created a problem with the catamaran’s steering system. The text above has been changed for accuracy.

NMB RV Resort Back As Presenting Sponsor For Englewood Beach... 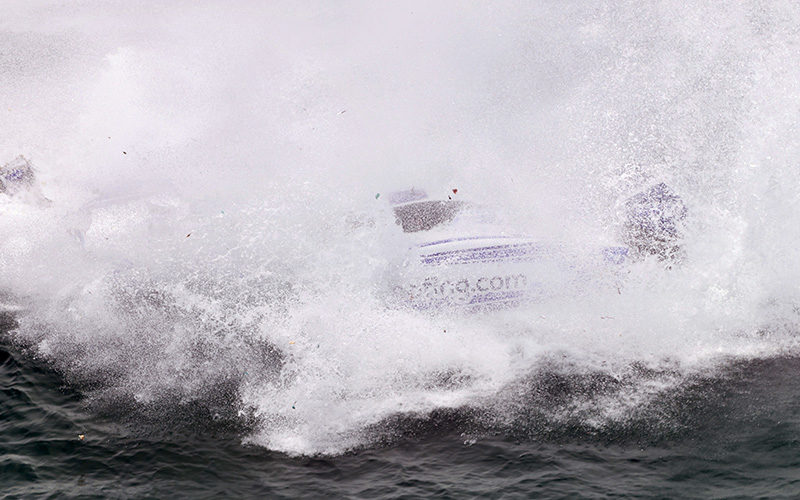