Your go-to source for performance boating.
HomeIn the NewsHindley On Board for Saturday’s Lucas Oil Ocean Cup Record Run 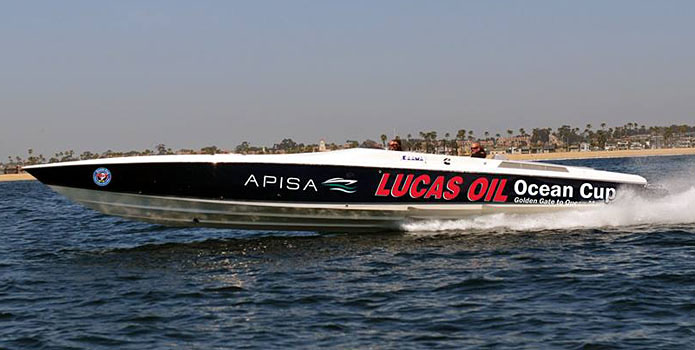 “I consider Andy a friend and the ocean expertise he brings to this team is incredible,” said Hook, a world champion offshore racer who guided the Lucas Oil SilverHook team to a 2013 Super Boat International (SBI) Superboat Extreme class national championship and will be racing next month at the SBI Key West World Championships. “Recently in San Francisco prior to the America’s Cup/Louis Vuitton Cup, Andy and I were training the umpires on the best way to run the 43-foot Willard Marine Interceptor (which will serve as the start boat in tomorrow’s attempt). This weekend will be quite a different adventure.”

A former director of the Powerboat P1 World Championship international offshore racing series, Hindley skippered the Save the Children yacht in the 1996/97 BT Global Challenge round the world race, placing third overall with a combined elapsed time of 165 days.

“I’m delighted and excited to be part of the team making the record attempt,” Hindley said. “Having worked with Nigel and the Lucas Oil team during my time (with Powerboat P1), I know how professional, skilled and dedicated they are and to get the chance to join them on a record attempt is a rare privilege. The Willard Marine 43-foot Interceptor proved itself a very valuable asset as an Umpire boat during the recent America’s Cup and I’m looking forward to racing its big brother—should be a hell of a ride.”

You can follow Saturday’s record attempt, which is being sanctioned by the American Power Boat Association, online via satellite tracking here.