Your go-to source for performance boating.
HomeIn the NewsHighlights From the 2020 Los Angeles Boat Show

It’s safe to say the move from downtown Los Angeles to The Fairplex in Pomona, Calif., was a smart one for the Los Angeles Boat Show, which opened Thursday (Jan. 9) and closes on Sunday. Now in its fourth year at the expansive fairgrounds, the 64th annual show—at least in terms of the performance boat scene—is bigger than it has been in more than a decade. And more successful—at least for most of the boat company representatives who I spoke with on Friday while walking around “High-Performance Hall,” aka building No. 5.

The team at Nordic Boats and its sister company Hallett Boats in Lake Havasu City, Ariz., had nine different boats on display—two of which were brand new models, a massive 48-foot V-bottom and a sporty 31-foot true-tunnel outboard catamaran. Yet it wasn’t the wide-ranging lineup of beautiful boats on display that was the most remarkable thing. The most impressive part was that the company took deposits on at least seven boat sales on opening day of the show—the best first day of any show that Nordic general manager Thane Tiemer has seen in his 10-plus years with the company.

Directly across from Nordic was a significant display from Shockwave Custom Boats in Corona, Calif., which included eight different boats ranging from company’s smallest model, a 21-foot Skier V-bottom to several deck boats and 30-plus-foot V-bottoms. And next to Shockwave was industry veteran Jerry Barron’s latest venture, Barron Boats, which had one of its 290 Sport deck boats alongside its 19-foot V-bottom.

The DCB Performance Boats crew went all out as usual with five radical new boats, including three outboard-powered catamarans—an M33R Widebody with twin Mercury Racing 450R engines, an M28R with a pair of 450Rs and another M28R with twin 400Rs—and a new M31 Widebody powered by twin Mercury Racing 700SCi engines that has an open bow that can be closed when the cut-out section of the deck is reattached. The showstopper of the bunch was an incredible new M35 Widebody featuring a pair of 1,450-hp Teague Custom Marine engines that has yet to hit the water. Rest assured speedonthewater.com is going to have a story on the 35-foot cat once the El Cajon, Calif., builder tests it in the coming weeks.

Check out the slideshow above for more images from the 64th annual Los Angeles Boat Show.

Just a year removed from its ownership transition, Eliminator Boats had a spectacular display, which included two 25 Speedster cats—one with twin 450Rs and one with twin 300Rs—a 27 Speedster with twin 400Rs and a 28 Fun Deck. But the most extraordinary boat of the group was the Mira Loma, Calif., company’s 36 Speedster powered by twin Mercury Racing 1350 engines that was finished just in time for the show. The eye-catching orange, gray and black 36-foot cat was featured a beautiful six-cockpit with digital displays and color-matched GatorStep flooring throughout.

The father-and-son crew at Howard Custom Boats, Gene and Mike Willen, also had two gorgeous boats on display—a 288 Sport Deck with a Teague Custom Marine 1050 engine along with one of its new 255 VTX Sport Deck models.

Lavey Craft Motorsports owner Chris Camire, and his son, Chris, had a couple of stunning boats on hand, a 29 NuEra and a 26-foot RPM by Lavey Craft catamaran powered by a single Mercury Racing 700SCi engines. It was nice to see a smile on the elder Camire’s face as he talked about the new builds the Corona, Calif., company has in the works.

Same goes for the team at Advantage Boats, which had its latest build—a 29 X-Flight with a Mercury Racing 565 engines—on display. The Lake Havasu City company’s vice president and COO Scott Dreisbach and longtime sales manager Bob Sepulveda shared information about some other cool builds coming from the iconic boat brand, so keep an eye out for a story on those as well.

It also was awesome to catch up with Jeff Bohn and Hernando Rodriguez of Cobra Performance Boats. The Montclair Calif., company had three stock boats on display—all awaiting a customer’s engine choice—including a striking new 270 Python deck boat.

Essex Boats had a full display at the show, as did the new regime at Interceptor Custom Boats.

Of course there were several parts and accessories companies on hand as well, including AO Coolers, CP Performance, Eddie Marine, Hardin Marine and Livorsi Marine. It was nice to see my friends at Wozencraft Insurance at the show as usual, along with the crew from River Dave’s Place led by the-one-and-only Dave Johnson.

Countdown to Miami: Inside the 2020 Miami Boat Show 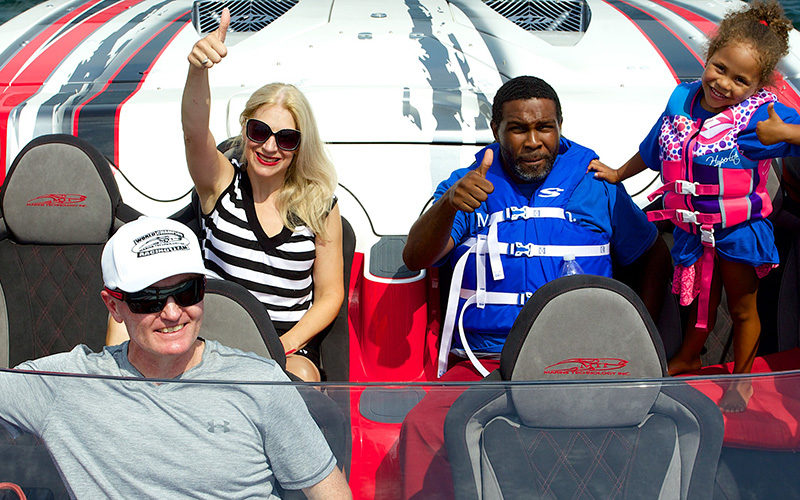