Editors’ note: Part assignment/part vacation, Ryan Johnson, speedonthewater.com’s national sales manager, traveled to Houston, Texas, with his girlfriend, Merit, to take part in the Texas Outlaw Challenge for the first time. As we expected, he was thoroughly impressed by the hardware, the food and the hospitality he found in Texas. Here’s his recap from the 10th annual Texas Outlaw Challenge as a follow-up to our story on the event’s top-speed shootout (read it here).

For quite some time, I’ve wanted to attend the Texas Outlaw Challenge so I was pretty excited to make the trip. My girlfriend, who has hardly any experience with go-fast boats, was just as excited.

Ryan Johnson and his girlfriend, Merit (from left), had a blast at the Texas Outlaw Challenge. One highlight was getting to spend time with the party host himself, Kenny Armstrong, and his son. All photos by Ryan Johnson/Speedonthewater.com

Fortunately for us, the media relations team of Erica and Jolanta was well organized. On Thursday evening, before we headed over to the Stampede Street Party, we picked up a fantastic itinerary that included information on the top-speed shootout viewing party the next day. Along with the band playing at the street party, which seemed well attended, there were a variety of boats on display, including center consoles from Statement Marine and Nor-Tech Hi-Performance Boats, V-bottoms from Cigarette Racing Team and Outerlimits Offshore Powerboats, and catamarans from MTI and Skater Powerboats. 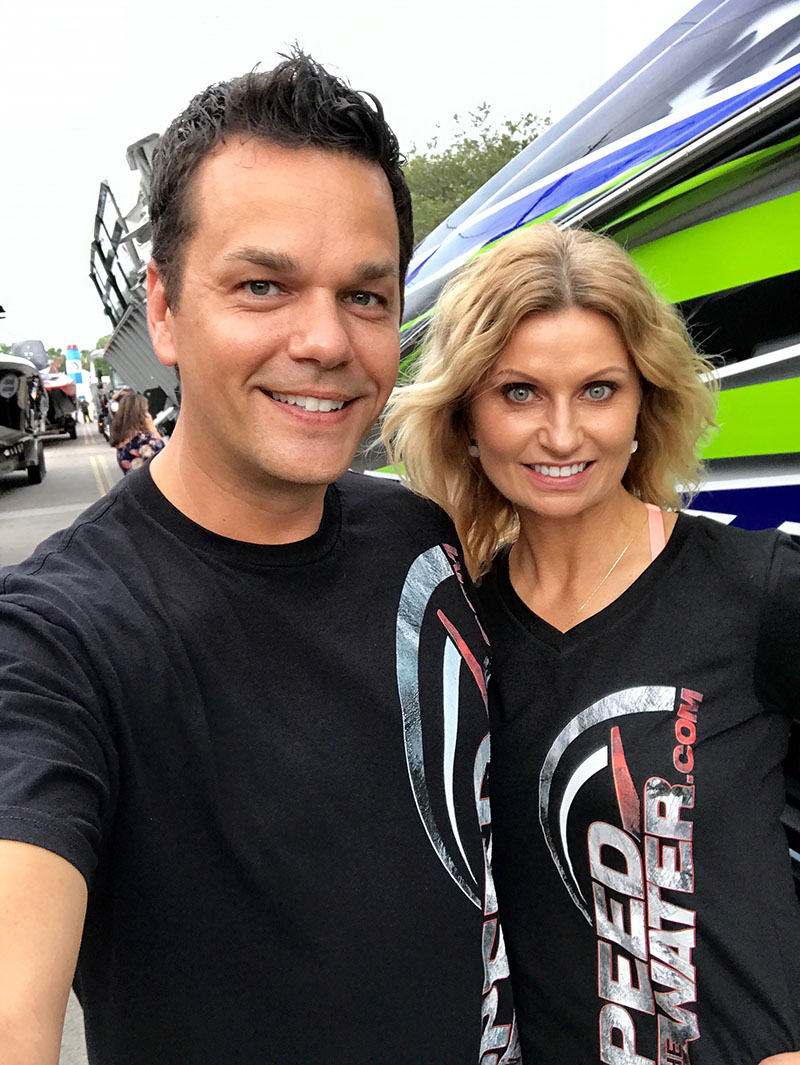 The next morning, the drivers’ meeting for the shootout started promptly at 7:30 a.m. at Alan’s Swamp Shack and safety was thoroughly addressed. From there, we made our way to the host home of Tiffany and John Van Sants, who welcomed the media crew with a Bloody Mary party on the dock. I felt like we had the best viewing area between the Van Sants’ dock and the neighboring dock, which had an upper level to get more of an aerial view of the boats racing down the new three-quarter-mile course.

It was funny because Jolanta told us the night before that we’d be so close on the docks that we could get splashed—and she was right. Thanks to one of the rooster tails from Gone Again and the wind blowing into the docks, we definitely felt part of the spray.

Following the shootout, we headed to what is likely the most well-known house party on the water—the annual bash hosted by Kenny Armstrong, who owns Phantom, the Rolls Royce-inspired 48-foot MTI cat. Armstrong’s guests arrived by car, boat and helicopter. Merit and I have never been to a party even close to this magnitude before. There had to be more than 1,000 people there and we guessed there were at least 150 boats stacked in rows in the channel, not to mention boats beached on Armstrong’s personal beach.

Food options ranging from healthy to deep fried were continuously coming out for all of the guests to enjoy, and if you wanted a drink, that was never an issue as the permanent pool bar was rocking out drinks along with the temporary bars set up along the sides. Of course the pool party was off the charts and the bikini contest with a dozen beautiful women definitely kept the crowd’s attention.

The next stop that evening was the sponsor-appreciation casino night, which was a pretty cool venue with a dimly lit atmosphere where everyone was dressed up playing poker, roulette, blackjack and craps. We got the chance to hang out with Armstrong, who said his party was another success. One of Merit’s highlights came after she doubled her money, which went into a drawing, and ended up winning an AO Cooler.

On Saturday, Merit and I had the opportunity to ride with Jake and Gina Nossaman in their 38-foot Statement Wired Up. It was Merit’s first time in a boat like their and it was so much fun to listen to her as we were sitting up front and she was screaming and laughing as we bounced up and over the waves. During the run we only encountered one cloud with a little rain that felt like needle pricks as we were cruising around 60 mph to our destination. Around that time, we passed by some cool barges and large container ships.

Check out more of Ryan’s images from the Texas Outlaw Challenge in the slideshow above.

When pulled into the lunch stop, the boats were already stacked up around the resort and the party was in full swing. Everyone was having a blast in the pool. For me, I had just as much fun watching boaters masterfully back their boats into narrow slips as the transom exhaust gave out a deep gurgle from the engines.

After a few hours at the resort, we cruised back to the marina and hit a few good waves along the way that the Statement handled with ease. A few hundred yards out from the channel to end our ride for the day, Jake stopped the boat and we observed a tornado dripping out from the clouds. We don’t think that it actually touched down, but it was pretty neat to see.

Actually we were lucky over the course of the weekend as Tropical Storm Cindy headed east of the bay area so we had pretty good weather on Friday and Saturday.

Of course, it’s all about bringing boating enthusiasts from around the country together to participate in the events, share fun times together and also help out with local charities. From my perspective, the Texas Outlaw Challenge organizers nailed it.