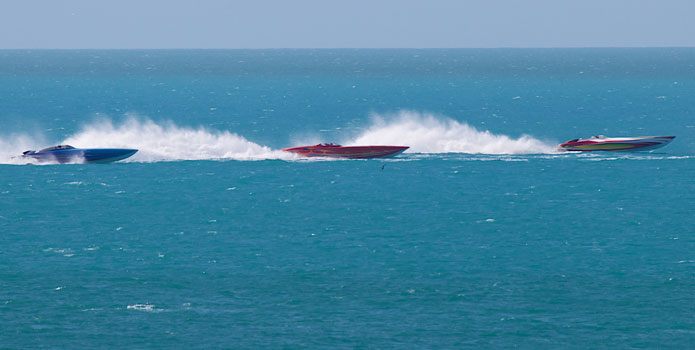 With the first wave of high-performance powerboat boats leaving tomorrow for the Florida Powerboat’s Club’s annual Key West Poker Run, club president Stu Jones is assuring members that the high 15- to 20-knot winds out of the East, which are predicted to persist throughout the week but diminish somewhat this weekend, will not present a major problem for participants. In a press release this morning, Jones pointed out that most of the 160-mile-plus run from Miami to Key West is on protected Intracoastal water.

“Certainly, we have a variety of options if the winds continue through late Wednesday” said Jones in the release. ” The last 37 miles from Bahia Honda Bridge are offshore in Atlantic coastal waters, as boaters run the shoreline into Key West Harbor.

“The East winds create a following sea condition, which most experienced drivers can handle with relative ease,” Jones continued “It’s a matter of getting the boat dialed-in, adjusting trim, tabs and throttle, for the safest, driest ride.”

For poker run crews not willing to tackle the last leg offshore, Jones said there is overnight docking a Sunshine Key RV Resort & Marina and multiple forms of for-hire transportation are available from Marathon to Key West.

“We’ve dealt with these weather scenarios so many times in the past,” he said in the release. “It’s just a matter of going to ‘Plan B’ when necessary—it’s all part of Florida boating.”

For participants who want to split up the run, just suggested staying overnight in the Upper and Middle Keys at either Postcard Inn or the Hawk’s Cay Resort. Poker runners who decide to choose this option will need to make their own reservations.