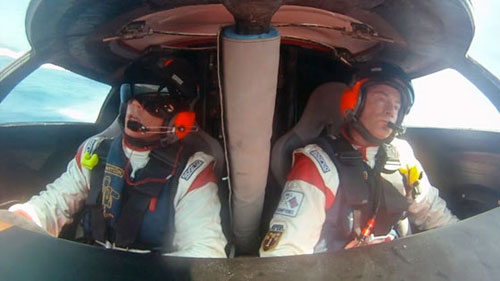 A view into the cockpit with Nigel Hook (right) and Michael Silfverberg.

In the perennially turbulent world of offshore powerboat racing, British-born and raised Nigel Hook is the rarest of birds—a longtime racer who no one ever has a bad thing to say about. Sure, Hook, 54, is a tough competitor on the racecourse, and he’s hungry to win. But off the racecourse Hook is a perfect English gentleman, one who happens to hold dual citizenship in the United Kingdom and the United States. That transatlantic presence, plus a couple of world championships along the way, are a large part of why he has been able to retain sponsorship from Lucas Oil for well over a decade – it’s currently is the longest-running team sponsorship in offshore racing.

“I was inspired to race by my uncle Roger Hook in England,” says Hook. “Our first race was the Dawlish 100 in 1974, which did in a 19-foot monohull with twin 100-hp Mercury outboards.”

Photographer Brown on Sean Collins: “Couldn’t have done it w...

Inside Look at Cigarette Racing Team Production on Science C...