Although the Air National Guard H1 Unlimited hydroplane series isn’t racing again until its season finale—the Oryx Cup UIM World Championship in Doha, Qatar, on Jan. 10-12—there is quite a bit of series news swirling around this week.

First off, the Oh Boy! Oberto hydroplane and driver Steve David are back in the lead for the national high points championship heading into the final race in Qatar. After taking first at the San Diego Bayfair race, but being disqualified more than an hour later when H1 officials determined there had been a flagrant fuel violation, the Oberto team filed a protest, which was upheld by an H1 appeals committee earlier this week.

With the victory reinstated by the H1 board of directors, David holds a 652-point lead over Dave Villwock, driver of the U-1 Spirit of Qatar 96 boat, with Graham Trucking driver Jimmy Shane sitting in third just 172 points behind Villwock. You can read the full explanation from the board here.

“On behalf of my team and me personally, I want to thank the H1 appeals committee for their considerable research and deliberations resulting in their unanimous vote to support our appeal and thus the H1 board vote to reinstate Oh Boy! Oberto as the winner of the 2012 San Diego Bayfair race, and the Peters & May North American Championship,” David wrote on Facebook. “I also appreciate the H1 efforts to enhance the governing aspects of the waterside of our sport to reduce tensions, give you our fans immediate decisions, and provide the very best competition our sport can provide. We look forward to fierce and fair competition in January at the world championships in Doha, Qatar, and throughout the coming years.”

H1 Chairman Sam Cole agreed with David, stating: “We can now put this event in our rear view mirrors and move forward to the Oryx Cup UIM World Championship and the continued growth of the sport.”

Being shipped by Peters & May, the series boats are expected to arrive in Qatar by mid-December. Photo courtesy H1 UnlimitedPeters & May is definitely gearing up for the event as all 10 boats making the trip to the Persian Gulf for the fourth running of the Oryx Cup, arrived at the Port of Savannah in Georgia this week prepped for the trip halfway around the globe.

David Holley, CEO of Peters & May, said all has gone smoothly and the hydro fleet should be loaded aboard the Saudi Tabuk and underway as scheduled on Nov. 3.

“In our fourth year of working with H1 on this venture, I am very pleased to say our people and the race teams have become very good at working together, and what was once a major undertaking has become fairly routine,” said Holley, who added that the crossing is expected to take until mid-December.

“As always, it is comforting to know that our sport’s assets are in the hands of a company as trustworthy and professional as our friends and shipping partners at Peters & May,” said Cole, who also announced that plans are being finalized to have the boats stay in Doha for a second event to be held Feb. 9-12 with the final day of racing on Feb. 12 as part of Qatar’s National Sports Day. The race would mark the start of the 2013 season and is expected to become an annual event.

The U-11 Peters & May boat will establish a UK National Speed Record as the first Unlimited hydroplane at the Coniston Records Week. Photo courtesy Peters & MayLast but not least, the Unlimited Racing Group’s U-11 Peters & May will make history as the first Unlimited hydroplane entry at the Coniston Power Boat Records Week (Nov. 5-9) in Coniston, England. Since 1970, the annual powerboat speed week event brings together all classes in the sport to compete for a UK National Speed Record.

With driver and co-owner JW Myers at the helm, the boat will establish a UK National Speed Record for the class while thrilling race fans thanks to global boat transport leader Peters & May. Working with a number of international sanctioning bodies and race teams, the company has taken on the challenge of growing interest in powerboat racing among fans and competitors alike, especially at the grassroots level.

“We have a number of goals besides the records,” Holley said. “We want to remind the world of the strong presence and history of powerboat racing in the UK. We’d like the whole of Europe to get more familiar with the H1 Unlimited series, and we are always looking to strengthen the bond between two power boating strongholds like the UK and the USA.”

To that end, the U-11 was rebranded for the 2012 race season to reflect both the company’s and the team’s roots in both countries. The boat incorporates a red, white and blue graphics package with the team number on the rear wing depicting the “U” as the Union Jack and the “11″ as the Stars and Stripes. Both nations’ flags adorn the hull on the port and starboard sides. The boat also will carry graphics memorializing P1 Superstock UK series pilot Mike Lovell, who died in a racing accident Sept. 16 in Weymouth, England. Lovell’s co-pilot, Dan Whapples, who suffered serious injuries in the accident, also will be honored.

An Afternoon With Team Gasse 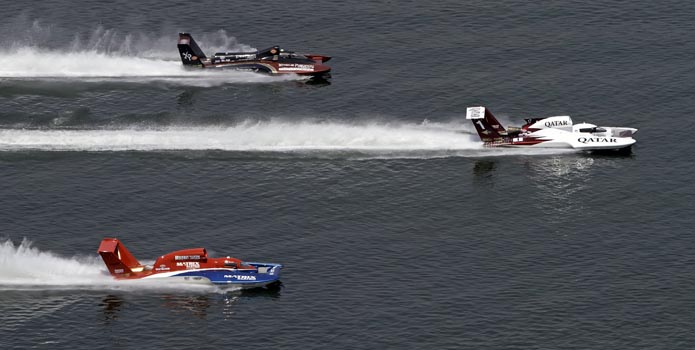