It was an emotional weekend to say the least for Blake and Brock Gratton as they competed in the opening round of the 2012 P1 SuperStock USA Championship at the St Cloud Grand Prix of the Sea in Florida. Not only were the twin brothers (as well as many supportive friends and family members) participating in a boat racing event for the first time since their father Joey died in Key West, Fla., in November, but the Peters & May Racing teammates exceeded expectations by claiming a narrow victory after four heat races on Sunday. 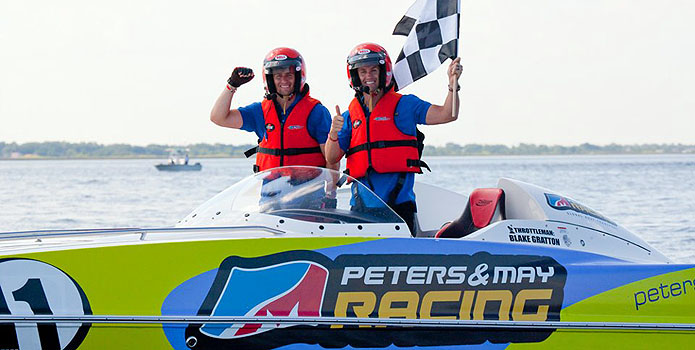 After four heat races in St. Cloud, Fla., Blake and Brock Gratton won the first round of the P1 SuperStock USA series.“This weekend was truly incredible,” Blake said this morning, adding that it took more than a day for the win to sink in. “There were a total of four heats, with each one of them a battle. Because we did so well in each heat, we had to start on the outside in each of them, which made it very intense as we picked off boats to get our first win. Everyone out there raced their hearts out and raced well.

“When Brock and I passed the first-place boat to win our first race (in heat 3), we both looked at each other, high-fived and said ‘Dad would be so proud right now,’ ” he continued. “It was definitely an emotional day because we wish he could be there, but we know for a fact he was there in spirit. We raced exactly how he would have raced and learned from the best. This weekend really meant a lot to us and we had the support of our family and friends. Everyone was out there cheering us on.”

The brothers, who finished second in the first two heats and third in heat 4, were pushed all the way by Eric Treadwell and Jason Roesch in the Pier57/Treadwell boat, which earned two firsts, one fourth and one sixth. Heat 1 saw Tim McDonald and Mike DeFrees of Oregon Custom Marine (OCM) take advantage of their pole position and go on to claim the checkered flag.

Earlier in practice, Kyle Dietzen and Tammy Tranter of the Camping World/Good Sam team had to withdraw after pushing hard into turn 4, catching the wake of the boat in front of them and rolling their 250-hp P1 Panther. Both pilots walked away safely.

Heat 2 saw more competitive racing, especially in the battle for fifth place with MYCO, Livorsi and OCM neck and neck as they passed the finish line for the final lap. Pushing hard for valuable points, all three came around turn 1 in a spray of white water, with OCM replicating Camping World/Good Sam‘s roll which brought about the end of the heat.

P1 SuperStock USA moves to Biloxi at the end of April for the second round.