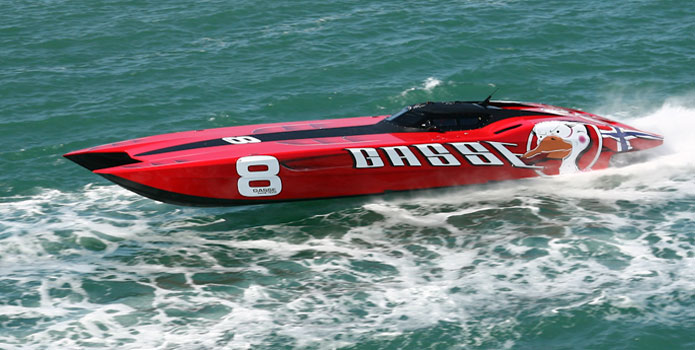 Proving that sea conditions and racing skill can neutralize a horsepower advantage, Gasse, a 48-foot Marine Technology, Inc., catamaran with twin 1,350-hp turbocharged piston engines from Mercury Racing bested the Turbine-class 50-foot Mystic Aqua-Mania cat and its fellow 48-foot MTI Semper Fi cat, both of which are powered by twin 1,850-hp turbine engines, today for the overall win in the third race of day one at the Super Boat International Key West Offshore World Championships. Finishing well ahead of the five-boat, two-class fleet, the 48-footer driven and owned by Norwegian Tor Staubo and throttled by John Tomlinson also came in first in is own Superboat Unlimited class ahead of the Spirit of Qatar and Miss GEICO cats.

“It was really rough today,” explained John Tomlinson. “The turbine guys have the horsepower to outrun us—Semper Fi outran us at the SBI Nationals in Clearwater (Fla.)—but rough water is a different deal. They just didn’t run as hard as we did today.”

Tomlinson said he saw a top speed of 140 mph during today’s seven-lap race, but estimated Gasse’s average speed was in the 115- to 120-mph range. “Our speed depended on where we were on the course,” he said. “Yesterday in practice we were 30-mph faster at our peak, but today was rough. It was solid, choppy 3- to 4-footers with a 20-mph wind out of the northwest that was really blowing the boat around.”

“At one point, GEICO pulled right alongside side of us,” said Tomlinson. “But they had a fuel-pressure problem on the last lap and we finished about 45 seconds ahead of them.”

Forecasting the Future of Baja, Donzi, Fountain, and Pro-Lin...