Your go-to source for performance boating.
HomeNew ProductsGallagher on Second Deep Impact 39’ Sea Trial: “Happy where we are now.” Deep Impact completed the second round of sea trials for the prototype of its new 39-footer. Shown in the foreground, sand bags in the cockpit were used to add weight.

The second round of sea-trials for the prototype of Deep Impact’s 39-foot center console went as planned on Friday, July 1, according to the company’s Tim Gallagher. Bad weather had forced Gallagher and the rest of the test team for the Miami-based boat-builder to postpone their efforts the day before.

“It went well—I got what I needed to select props for the first production boats,” said Gallagher via text message. “Despite rainy weather, we got two more sets of props tested.

“I’m happy where we are now, at least until I have a production boat to dial in,” he added.

Gallagher did not provide performance numbers for the new model, which is not unusual for a builder with a boat in the prototype stage. The 39-footer will debut at the 2011 Fort Lauderdale International Boat Show. 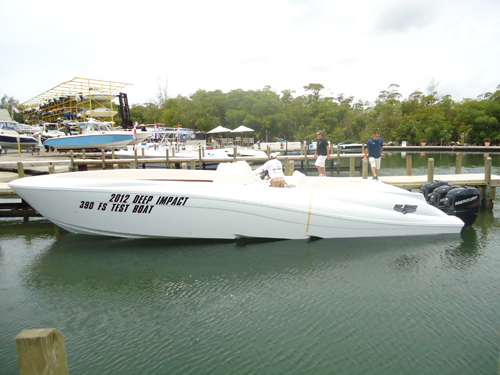