What started as a casual, New Year’s day happening in the Bradenton/Sarasota, Fla., area more than 10 years ago became something far more meaningful when veteran offshore racer Joey Gratton died on November 11, 2011 after an accident during the Super Boat International Offshore World Championship in Key West, Fla. Renamed the Joey Gratton Memorial Fun Run in 2012, the event has attracted healthy fleets in honor of the beloved racer, and this year is no exception with 70-plus powerboats of all shapes and sizes currently that have pulled up to the docks at the Tarpon Pointe Grill and Tiki Bar, the host venue for lunch and the rest of the day’s celebration.

As in the past three years, Priscilla Gratton, Joey’s widow, is attending the event. Blake and Brock, their twin sons, piloted their triple outboard engine-powered 30-foot Spectre catamaran in the run, which began in Sarasota Bay and ended on the shoreline of the Manatee River, the home of the Tarpon Pointe Grill.

“I’ve been watching the boats come in now,” said Priscilla Gratton. “Brock and Blake came with their boat. They’re docked right next to Kyler (Talbot, of the Talbot Excavating offshore racing team). Billy Glueck brought the original Popeye’s raceboat with all the original stickers. It’s just pulling in now.

Among the local participants in today’s event is Grant Bruggeman (seated on deck) of the 2014 World Champion Broadco offshore racing team.

“It’s tough,” Gratton continued after pausing for a moment. “Every day is tough. But it’s wonderful to see all these people who cared about Joey so much. This was his world. And it’s nice to see the boys (Blake and Brock) being able to be on the water. They enjoy it so much. They love the sea like Joey loved the sea. When Joey was a live and used to do this, there were maybe 10 boats. It has just grown every year—it’s just awesome.”

A longtime friend of the Gratton family, offshore racer Ryan Beckley is the key organizer for the event. Photographer Pete Boden, another Gratton family friend, is on hand to capture the event.

Even overcast skies (captured here from the deck of organizer Ryan Beckley’s 24-Skater catamaran) could not dampen enthusiasm for today’s event. 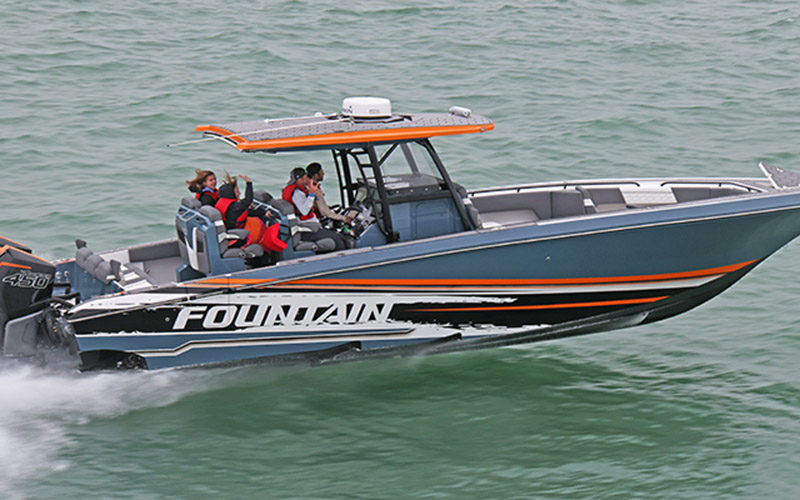