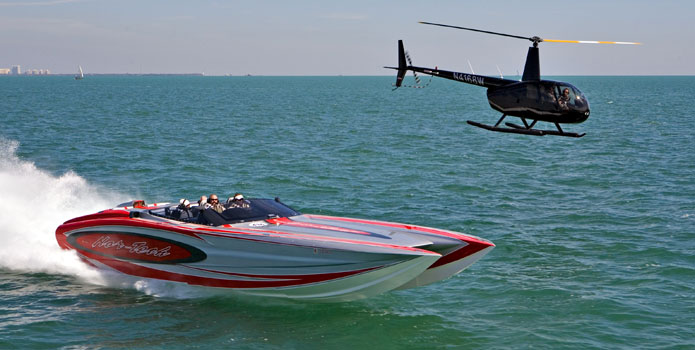 Ace helicopter pilot Mark Palmieri was a main reason the Florida Powerboat Club images and videos are so memorable.

It is with great pain and utter sorrow, that I bring this tragic news to our extended Florida Powerboat Club family. Helicopter owner/pilot Mark Palmieri lost his life late Wednesday in a horrific crash of his Robinson R44, one of four helicopters owned by his company, Bravo Helicopters. Also perishing in this accident, a Miami-Dade Fire Rescue employee, whose name is yet to be released. I spoke with a Miami-Dade Fire Rescue official earlier today, to confirm this second pilot was on board. The NTSB is currently investigating the accident, which was highly publicized by all of the local news and many national news stations across the country in the last 24 hours. (Read the Miami Herald story here.)

Mark was well known to many of us at Florida Powerboat Club in recent years, as the provider of most helicopters used in the South Florida filming and photography of FPC poker run events and the “Powerboating in Paradise” TV series. Mark has always been an outstanding pilot, focusing on safety and abiding by all FAA rules and regulations at all times. It has not been determined yet what the exact cause of the crash was, although there is some speculation that during this routine maintenance flight, a section of tail rotor had separated from the aircraft, causing it to fall rapidly into the parking lot of an industrial complex, about two miles west of Tamiami Airport where Bravo Helicopters is based. 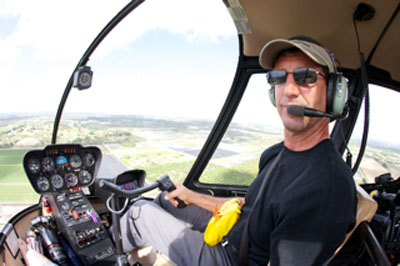 Since 2006, Mark Palmieri had been a part of the Florida Powerboat Club family. The owner of Bravo Helicopters will be missed dearly.Mark has been a dedicated and loyal service provider to Florida Powerboat Club since 2006, when he started his business in South Miami. Much of the piloting on FPC events in Bravo-owned aircraft also has been provided by Alex Arias, a Miami pilot, who became close friends with Mark in recent years. Alex, currently away on a private flying mission in Dallas, confirmed this sad news with me last night, saying, ” Stu, we lost Mark.”

In a strangely related incident just two years ago, Mark survived a high-speed crash in a remote area of the Florida Everglades while piloting a similar Robinson R44 back from the Orlando area after visiting his ailing mother. It was a miracle rescue mission in the tall saw grass, as a single cell phone call by the barely conscious pilot to his girlfriend, forced a 911 call that launched a major search and rescue mission. Mark’s helicopter had virtually disintegrated, and he was miles from roads and waterways. With Florida Fish and Wildlife Commission leading the effort, it was the ultimately the Miami-Dade Fire Rescue helicopter, a Bell 412, which saved Mark by airlifting him to Broward Medical Center in Fort Lauderdale where he later recovered. Although just a coincidence, the pilot/mechanic who accompanied Mark on this fatal test flight was also employed as a helicopter mechanic for Miami-Dade Fire Rescue, the same unit which played a major role in saving Mark’s life.

Mark was absolutely unparalleled in skill, experience and professionalism. He devoted his entire life to his career as a helicopter pilot, and we will miss him dearly. He is survived by his loving girlfriend, Carol, mother, Doreen, sister, Andrea and father, Elvio Palmieri, who currently resides in the Chicago area. Funeral home arrangements are forthcoming and are expected to be in the Kendall area, with final burial expected in the Orlando area, where Mark’s mother currently resides.

Our hearts and prayers go out to the families and loved ones for both victims.