Fountain Powerboats is building a new 30-foot Fountain offshore raceboat that will compete in the Super V Light class later this season. That’s the word from John Walker, the chief executive officer of the company in Washington, N.C. Walker also said that Fountain will help sponsor the 30-footer, though at the request of its owner he declined to name the team. 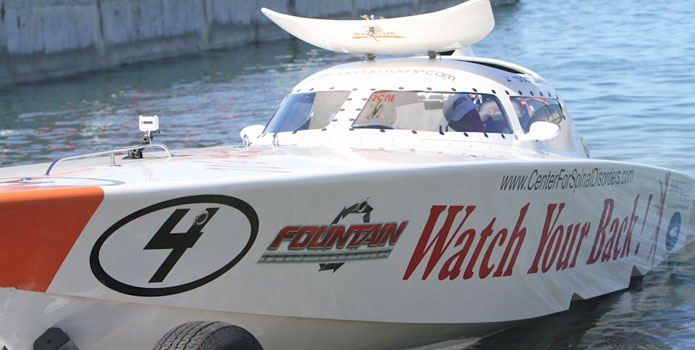 Fountain’s latest SVL offshore raceboat will be similar to Watch Your Back (shown here), which the company built for Dr. Michael “Doc” Janssen.

“We’re going to work with them,” said Walker. “We worked out a partial sponsorship deal. We hadn’t heard from the racing side in awhile—I think the last one we built was for “Doc” Janssen (Dr. Michael Jansen, owner of the Watch Your Back 30-footer that competed in the SVL class) back in 2009. So when this gentlemen called and asked us if we’d build it we we’re excited about it.”

Walker said that while Fountain will handle all the lamination chores for the new canopied raceboat, which should be finished in a couple of weeks, the team will take care of the installation of the boat’s engine (the spec engine for the class is the Mercury Racing 525EFI) and rigging.

“They just wanted us to do the fiberglass work,” he explained. “They’re going to do the rest.”