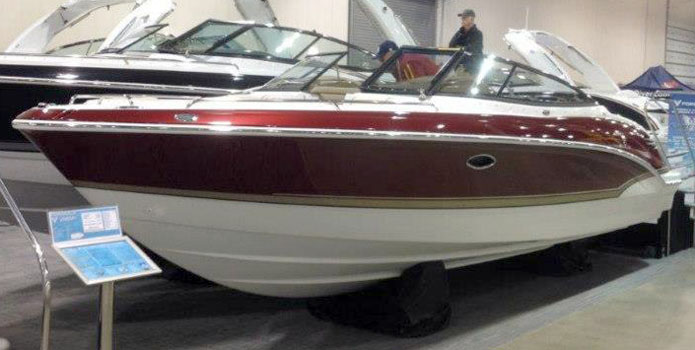 The newly redesigned 270 Bowrider from Formula Boats is on display at this weekend’s Spring Boating Expo in Michigan.

Formula Boats announced in a press release yesterday that its popular 270 Bowrider has been rede­signed and is making its debut at this weekend’s Spring Boating Expo in Novi, Mich. Along with the feature-packed 270, Formula will have its entire Bow­rider lineup on display, including the 240, 290, 310 and flagship 350 CBR. 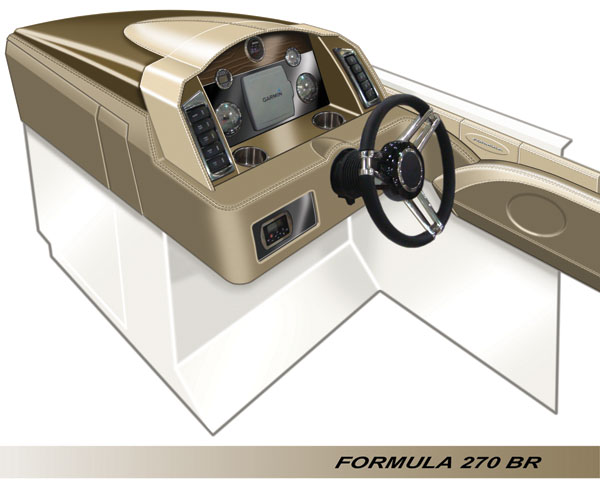 Formula’s exclusive designer John Adams redesigned the driver’s station of the 270 Bowrider to make total command at the helm easier.John Adams, Formula’s exclusive designer, kept the 27-footer true to the company’s heritage with great detail in the cockpit and an appealing mix of colors, angles and detailed stitching across all seating areas. Adams put a lot of focus on updating the helm and dash designs, including creating a balanced mix of chrome-bezeled gauges and intuitively placed rocker switches. He also created a virtual entertainment center with a an integrated glove box in the portside dash that features a Clarion stereo, iPod/MP3 and USB ports and a 12V outlet.

Formula also put an emphasis on convertible seating as both the helm and pas­senger backrests easily flip forward and aft, making watersport lookouts and conversations in the cockpit a breeze. The aft sunpad is now expanded to a fuller width and cleverly converts to an extended layout with an angled backrest in one smooth motion—perfect to oversee on-water activities at anchor.

An unprecedented 14 stainless-steel cupholders are cleverly integrated throughout the boat for all to enjoy and the well-designed storage compartments are abundant, accessible and convenient.

The 270 Bowrider is powered by single-engine offerings ranging from 300 to 430 horsepower packages by MerCruiser or Volvo Penta. From the convertible bow seating to the extended in­tegrated swim platform, the 270 is expected to deliver another excellent Formula experience.

For the complete press release and more photos of the boat being constructed, click here.