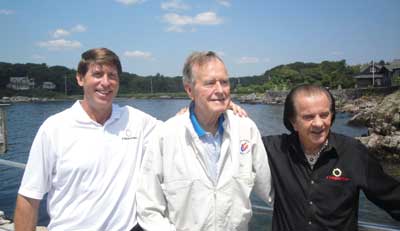 Apparently, former United States President George H. Bush wasn’t paying attention when current President Barack Obama told Americans early this year that this is “not the time” to buy luxury items such as “boats.” Score one for Mr. Bush—and I mean that in the most apolitical way—who just picked up a 38-foot-long Fountain center console with triple 300-hp Verado engines that reportedly can push the boat to 75 mph.

“I value my time on the water in one of our nation’s great coastal fisheries, and over the years my dependable, Mercury-powered Fountain powerboats have brought my family and I countless hours of enjoyment,” said former President Bush in a press release from Fountain. “I have learned to never doubt Reggie Fountain and his team. With each new delivery they somehow manage to top themselves.”

An avid angler—he’ll go after bluefish and striped bass when he fishes near his home in Kennebunkport, Maine—Mr. Bush has owned several Fountain models.

“I am honored to have President Bush as a repeat customer and a longtime friend,” said Reggie Fountain, founder and CEO of Fountain Powerboats, in the release. “He is not only one of our country’s great patriots, but also a great sportsman. We are proud to say that the Commander in Chief chooses a Mercury-powered Fountain.”

Now, if only Fountain can bring the current President into the Fountain fold—or at least convince him to choose another luxury item to advise Americans not to buy. The marine industry does need that kind of “economic stimulus. ”

And I mean that in the most apolitical way.