For the seventh consecutive year, the members of OFF—Old F____s Forever (“Friends” or “Farts,” take your pick) gathered in Florida for our annual meeting. Thanks to the generous hospitality of Bill John, Gerri Prusko, and the entire staff of the Classic Raceboat Association (CRA), for the past two years we have found a new home at their event in Tavares, a small but vibrant community on the shores of glistening Lake Dora. The best part of this partnership is the blending of legendary boat racing personalities with iconic racing boats.

Last weekend’s event kicked off Thursday with a golf outing for the OFF folks. In that event, the Seebold family took on the Wilson clan—and lost. There is no doubt the competitive juices that propelled each of these teams to the very top of powerboat racing’s history were flowing with equal ferocity on the golf course. While my wife, Doreen, managed to hit the longest drive, the best performance of the day was put in by Jackie Wilson’s daughter (Mark’s sister), Sam, who is still smarting over the fact that her dad took away her raceboat for misbehaving when she was a kid.

So the ladies carried the day. Jackie provided an amazing assortment of trophies—all handmade in his woodshop back in England—for the golfers. His handiwork is unique, combining familiar boat racing-inspired shapes with almost “Star Wars”-like imagination. The day ended with a delicious barbeque and lots of laughs and good memories for those of us who participated

Friday featured the arrival of the CRA Vintage race boats and setting up the “racecourse.” This event is fully American Power Boat Association-sanctioned and includes all of the safety crews, inspections, and racing rules found at all major races around the world. The single exception here is—it’s not a race. In fact actual racing is not tolerated.

Those of us who do this on a regular basis realized long ago that we can put on a better show at 8/10ths speed running together with back and forth leaders than we could if we simply ran flat out. In addition, many of us are older than the vintage boats we bring, so reflexes are not what they were back in our competition days.

Finally—and frankly—we have nothing to prove. Our main goal is to share history, have fun, and enjoy and show respect for one another, albeit with a lot of good-natured ribbing attached. At day’s end came the annual CRA/OFF cocktail get-together where awards, a moment of silence for those who have left this earth, and special commendations are given out. 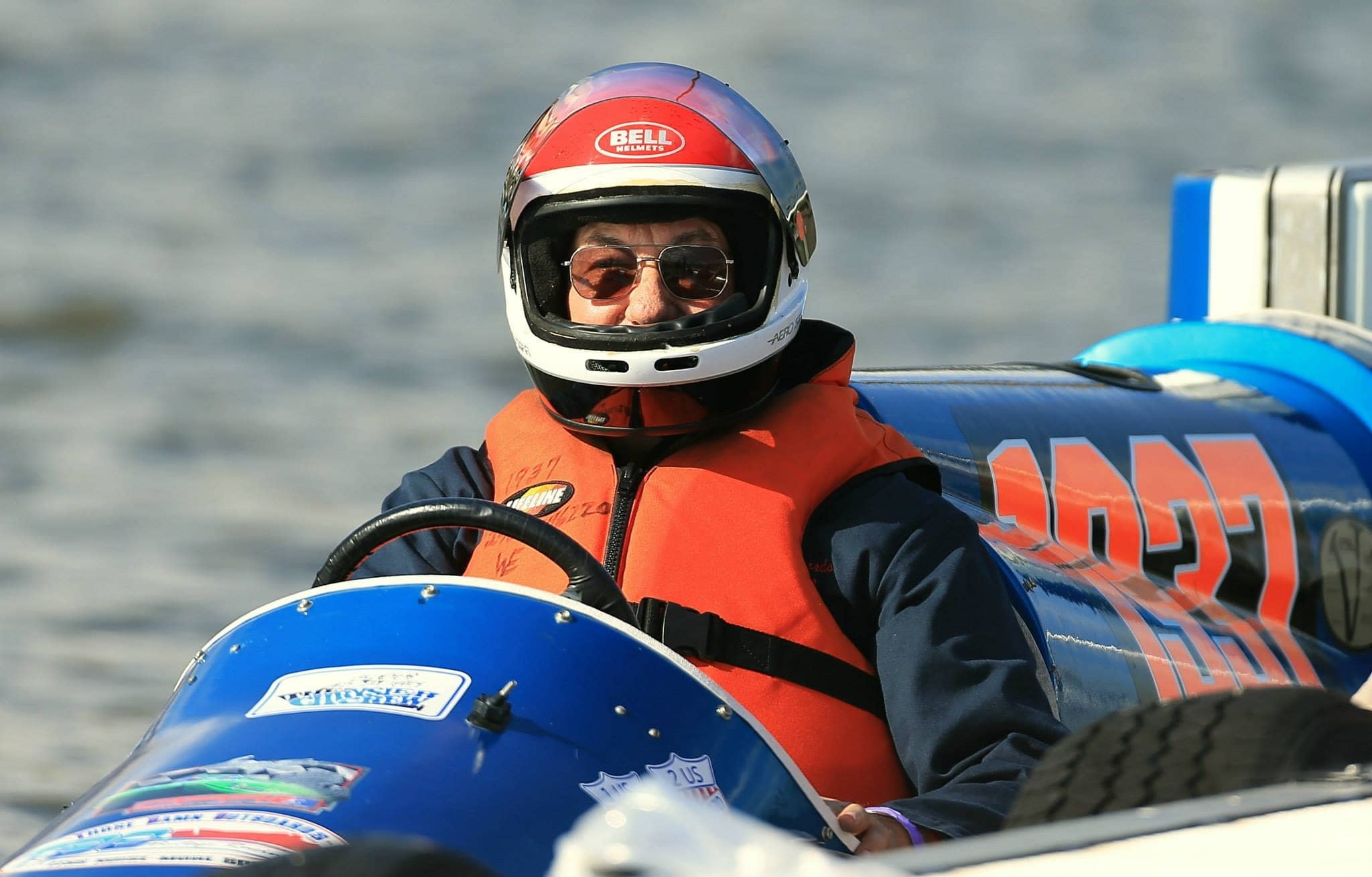 For a closer look at the vintage powerboat racomg hardware and action from last weekend’s event, check out the slideshow above.

Saturday and Sunday, brings us all out to watch and, in some cases drive, an assortment of the most influential hulls and equipment in boat racing’s history. Pete Boden of Shoot to Thrill Pix captured Molinaris, Staudachers, Lauterbachs, Gar Woods, Chris Crafts, E&T’s, Allisons, Raveaus, Magnums, Glasspars, Jones, Lloyd , Veldens, Sidsons, and even , my personal favorite, Switzer Wings. This year we even had a flyby from a current era, carbon fiber GP hydro.

Time does march on and now some of the oldest canopy equipped boats are reaching vintage age, so some testing was done to determine the suitability and readiness of the safety and rescue crews for this new technology. While the boats are not truly racing each other, one would never know it as triple digit speeds and ground pounding horsepower are on full display. The boats get around the somewhat abbreviated course and the hulls are run only with designs of similar type and performance.

Each “class” is run four times over a two-day schedule to assure ample on water time for every participant. My partner, Roger Hinsdale, and I had a very successful weekend with no mechanical failures and great performance displays coming from the boats in our “fleet.”

Saturday evening is reserved for the CRA dinner where personal achievements are recognized. I was honored to introduce two people I admire greatly: offshore racing legend, Sammy James (who started out driving Inboard Hydros by the way) and the amazingly gifted and talented Odell Lewis, who was one of Carl Kiekhaefer’s favorite drivers and development guys. Both men could, and still can, drive anything on the water at speeds equal to our current competitors.

One more person needs a note of thanks as well. In its early years OFF was sort of a homeless child and all the folks at Miss GEICO offshore racing welcomed us like family. A big part of that welcome came from Reese Lewis, who suddenly passed away yesterday. On behalf of all of the members of OFF, we have added her name to our list of those who now race in the heavens. She is truly an Old Friend Forever.

People often ask me why I have become so focused on the past after being involved in all kinds of boat racing development projects. My answer is simple: Looking at the past can show us the future as all major things move in somewhat of a circle. The lessons learned, skills developed and steps to success all have application in today’s and tomorrow’s designs and fabrication. Personally I look forward o many more get-togethers like these and many more spectacular days on the vintage race course. Even the youngest reader of this article will (too) quickly become a potential vintage racer.

In the end, it’s really all about respect for powerboat racing’s greatest generation, and the amazing stories and equipment they have passed on.

Editor’s Note: Rich Luhrs is a former boat builder, powerboat racer and television commentator, as well as a contributor to speedonthewater.com