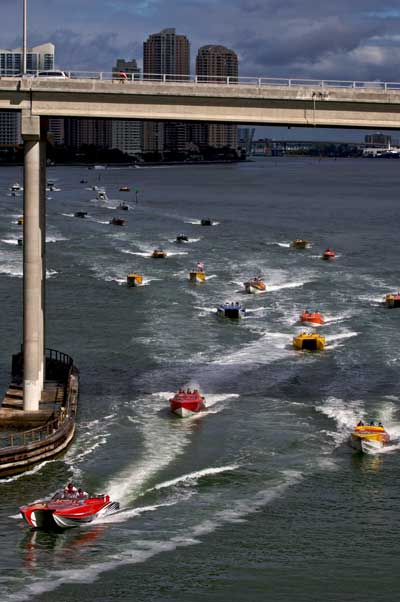 Participants in today’s Miami Boat Show Poker run organized by the Florida Powerboat Club will be greeted with an unusual sight as they make their way from Biscayne Bay to Holiday Isle/Islamorada in the Florida Keys. Manned by Florida Fish and Wildlife Commission officers, boats with flashing blue lights will be stationed in shallow and environmentally sensitive areas, including the narrow Featherbed Banks leg of the course.

The FFWC boats will be stationed in these areas to remind participants to slow down and proceed in single file through these legs, which represent small segments of the overall run but present significant grounding threats for boats that stray from the narrow channels.

“Some of these areas are no wider than this conference room,” said Stu Jones, the founder and owner of the Florida Powerboat Club, during last night’s drivers meeting at the Biscayne Bay Marriott. “In the channel the water is eight feet deep. Outside of it, the water is 6 inches deep. There’s no way you can go tearing through there three boats wide and expect to make it.”

Jones said that while he has always invited the local authorities, including the United States Coast Guard, to observe his events, this is the first time he actually has paid for members of a law-enforcement agency to work at one of his events.

“The Fish and Wildlife guys are ‘the cops’ on the water around here—the Coast Guard has bigger things on its plate, mainly homeland security,” said Jones. “I’ve spent several thousand dollars to have them here. Our club is the largest of its kind in the country, probably even the world. It’s a new world out there. This is how seriously we have to take safety.

“Who would have thought we’d have ever invited the cops to the party?” Jones added, then laughed. “But that’s the world we live in.”

FFWC officers also will be stationed in the same areas on tomorrow’s run.

JBS Racing Poised For Lake Of The Ozarks Shootout Competition