Your go-to source for performance boating.
HomeMattBlogFirst Sunsation 36 Dominator In Production Next Week 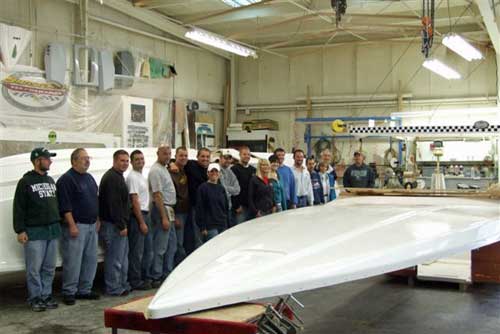 Catching up with Michigan-based graphics wizard Mitcher T earlier this week reminded me that I hadn’t spoken to guys at Sunsation Performance Boats in Algonac, Mich., in quite awhile. Last time we chatted was in spring 2009, and they were pumped up about their upcoming 36-foot-long stepped V-bottom But at that point, the boat was still on the drawing board.

Now it’s a reality—production on the first 36 Dominator begins next week.

“I have six units sold already—it’s amazing to have sales on something that doesn’t even exist yet,” Joe Shaldenbrand of Sunsation told me this morning. “All are staggered set-ups, and the first few are with (Mercury Racing) 525s.

Even with a staggered twin-engine configuration, the 36-footer’s cockpit is nine inches longer than that of the company’s popular 32 Dominator. Like the 32, the new model will be offered in the builder’s S, SS, SSR and XRT packages.

Schaldenbrand added that the 36 Dominator will cost approximately $40,000 more than Sunsation’s 32-footer.

“I am going to hold down the price,” he said. “We’re not trying to gouge anyone. We have so many customers who own 32s and would like to make the move a 43, but they just can’t afford it. But they can make the jump to the 36.”

Though Schaldenbrand said he had hoped to have the new model on display at the 2010 Miami International Boat Show in February, it won’t be completed in time for the event.

“But we’ll be there and we’ll have plenty of information on it,” he said.