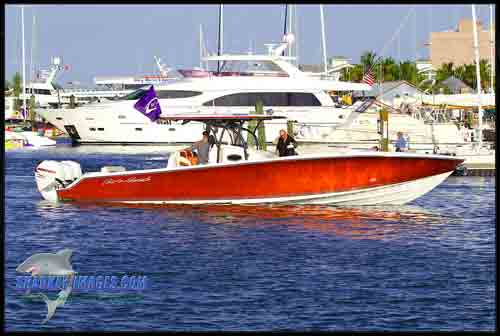 About an hour north of Key West on Atlantic side of Florida last Thursday afternoon, I took control of the Nor-Tech 390 Center Console that I’d been a passenger on since we’d left Miami that morning. Now, when I say I “took control,” I don’t mean I commandeered the 39-footer from our captain, Terry Sobo, the sales and marketing director of Nor-Tech in Cape Coral, Fla.

On the contrary, Sobo, who I’ve known for the better part of 16 years, pretty much forced me behind the wheel by abandoning it.

Whacked as they might have been, my priorities at the time had more to do with enjoying a cold beverage and hanging out with Nor-Tech dealer Scott Shogren, Sportboat magazine publisher Vicki Newton, our mutual friend Kelly Sears and a couple of other new friends than driving a boat. But Sobo is one persuasive dude, meaning he basically stepped away from the helm and left a hole that I would have been a fool not to fill.

The cold beverage would have to wait. Then again, given our destination and the event—the 2012 Super Boat International World Championships—in play, missing one cold beverage isn’t such a bad thing.

So there I was, behind the wheel of a model I’d reported on for a year, but had not actually driven. I lined up my position on one of two Garmin GPS screens and basically held the wheel straight for the next 60 minutes.

Truth was, I didn’t need the GPS. There was no place to go but south, as long as I held my course in the nearly flat water, and I’d done this run a couple of times before. The toughest part of job was keeping the endless string of crab traps safely on my right or left, depending on where one string ended and another began.

The lack of driving effort and skill required was not lost on my endlessly supportive friend Shogren.

“You have this nailed!” he hollered in my left ear, then laughed. “You are dialed in. You’re all over it. Man, can you drive a boat.”

At that point, someone cranked up the JL Audio stereo to a Spinal Tap “11” and the gentle, soothing sounds of Buckcherry going off about some mentally unstable woman with specific skills serenaded the cockpit. Not a big Buckcherry fan, but for some reason that one always brings a smile to my face.

Turns out it brought smiles to the faces of everyone on board. And, oddly enough, everyone knew the lyrics well enough to sing them in full voice. Nothing like a good sing-along to music so loud it drones out triple 300-hp Mercury Verado outboard engines turning almost 6,000 rpm and, in the process, creating a 62 mph headwind.

“I always use this song to measure the attitude of my crew,” Sobo screamed in my right ear. “Looks like this crew has a great attitude.”

Yes it did, but that’s not what you want to know about. You want to know how the 390 Center Console performed. And despite that most of my experience behind the wheel of the 39-footer entailed running it in a straight line—and to that end the 390 is a tracking machine—I would rate it as excellent.

At one point, Sobo wanted to cut off the flow of onrushing wind into the cockpit aft of the console, so he had me slow down to minimum planning speed, about 16 mph, so he could zip up the fabric wind-dams on each side of the boat. I trimmed down the outboards a few taps, meaning not much, and when Sobo asked me to hit it again I did. The bow stayed flat and soon enough we were cruising along at 62 mph.

Rounding “the corner” into Key West Harbor, right where the old Truman Annex complex begins, I trimmed down the outboards a touch and brought the speed down to around 50 mph. Having made the run in the past, I know that the seas can jack up from nothing to something in seconds in this spot, and the seas actually did pick up a bit. But from the ride in the boat, and its ability to sweep through a 50-mph turn in rock-solid fashion, you’d have never known it.

As usual, the Key West Harbor area was a hot mess of wakes and personal watercraft coming from all directions, so I pulled back throttles and our speed dropped to 25 mph. That I neglected to trim in the outboards didn’t matter—the boat stayed on plane. Not wanting to show off (yeah, right) docking Sobo’s personal boat in front of several hundred potential commentators enjoying cocktails at the Conch Republic restaurant next to the Florida Powerboat Club’s Poker Run Village, I let Sobo handle that chore. But I could have greased it in the anorexic space between that immense party-barge catamaran and that 50-foot Cigarette Marauder. Really, I could have. (Just ask Scott Shogren—he knows my skills.)

We said our goodbyes and went our separate ways. Vicki Newton and I had work to do for the next two days and everyone else—well, honestly, I have no idea what everyone else did. But I’m sure I’ll hear about it.

“Are you kidding?” I said. “I had a great time. I got to see the Keys again, really see them at a good pace, with a bunch of great friends. What’s not to like?”

I let him twist for a moment.

“Oh, the boat.” I added. “I can honestly say I’ve never had a better ride to Key West.” 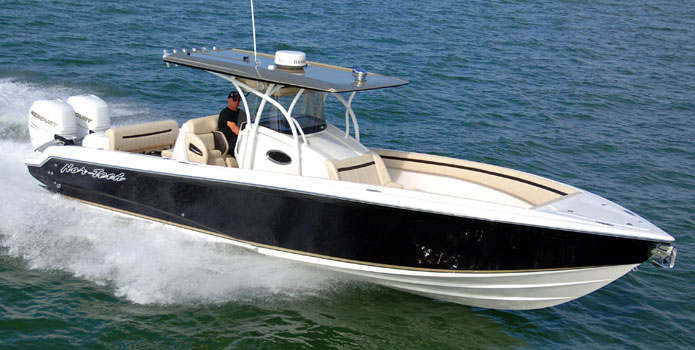 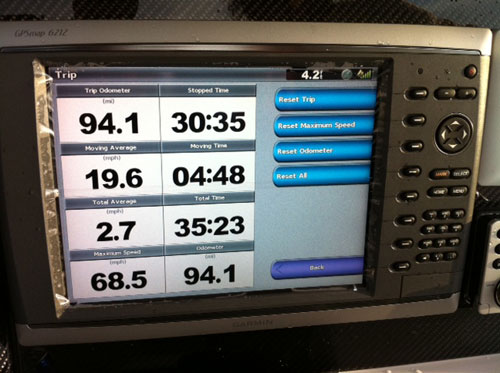