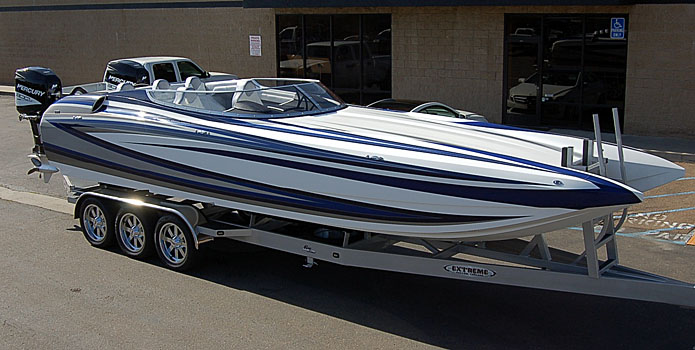 The newest and smallest boat in the Dave’s Custom Boats (DCB) M-Series catamaran lineup—the M29—was officially finished this week. Earlier today, the crew at DCB began the engine break-in process and plans to start dialing in the catamaran, which is powered by a pair of Mercury Racing OptiMax 300XS engines, sometime next week.

Ordered by a DCB owner who had an M35 Widebody model before purchasing the first 29-footer with the twin outboards, the M29 will be delivered to Lake Powell, the Colorado River lake on the Arizona/Utah border. As you can see from the photos, DCB had the engine cowlings painted to match the boat’s stunning blue, gray and white gelcoat graphics.

Since the M29 is a new model for DCB, it will be interesting to find out how the boat handles, accelerates and tops out with the twin 300-hp engines, which feature the 25-inch shaft length. Stay tuned for more updates from speedonthewater.com.