With last Thursday’s dial-in and testing session of a Skater 388 catamaran with the first pair of 1,700-hp turbocharged Sterling Performance engines, the final chapter of a story that began in summer 2010 has been written—at least for speedonthewater.com. The team that put the much-anticipated cat through its paces late last week in Baton Rouge, La., included Mike D’Anniballe of Sterling in Milford, Mich., David Wade of Baton Rouge-based David Wade Marine, the boat’s owner and a couple of other crew members. D’Anniballe and another Sterling employee made the trek to Louisiana to handle calibration and electronic issues with his new 557-cubic-inch big-block engines, the same platforms Sterling uses for its 1,550-hp supercharged engines.

“Everything went really smooth,” said D’Anniballe, who originally targeted the engines for an offshore race boat. “It’s phenomenal how hard the boat pulls.

“We didn’t do any top speed runs, but we did an acceleration run to about 165 mph and the boat got there in nothing flat,” he continued. “We did that in less than a mile.” D’Anniballe said that prior to his visit and recalibration work the engines were “falling on their faces” during hard, throttles-down acceleration. He said that issue, as well as an electronic issue, has been resolved in a big way.

“We were out there for about an hour and a half,” said D’Anniballe. “At the end of our tests, the owner said, ‘I’m not happy, I’m really happy.”

Testing to Resume on Sterling 1700-Powered Skater 288 in January

Sterling 1700-Powered Skater Back on the Water this Week

Sterling 1700s Getting Dressed for Final Dyno Testing and Shipping 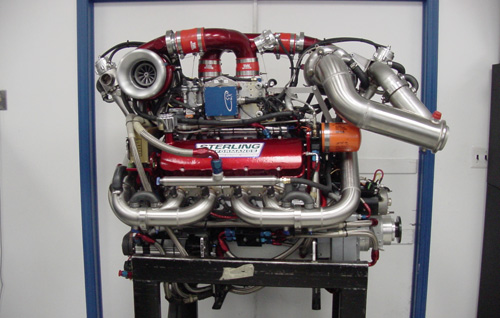