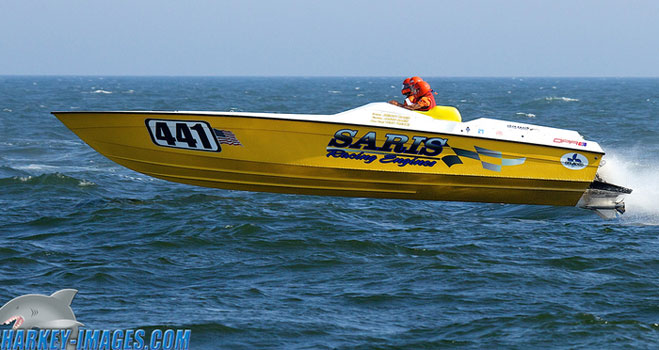 As a rule, running a new offshore raceboat in its first event with zero testing time is not a great recipe for success. But that’s exactly what Jason Saris and his son, Johnny, did this season with their restored 30-foot Cobra raceboat, powered by twin 650-hp engines they built, at the Offshore Powerboat Association race in Atlantic City in June.

“We working on it until the very last second,” said Jason Saris, the 56-year-old of Performance Marine, a full service center, engine builder and Skater catamaran dealer in Bolton Landing, N.Y. “We put it in the water, just to make sure it would get on plane. We finished it up and literally left for Atlantic City.”

Dubbed Saris Racing Engines, the boat did better than get on plane—it took first place in the Class 400 field. The father-and-son, throttleman-and-driver team followed up that win with a second-place finish at the OPA race in Long Beach, N.Y., and a victory at the Solomons, Md., race, the organization’s National Championships.