Your go-to source for performance boating.
HomeIn the NewsExpectations High for Support Our Troops Poker Run

Since its inception five years ago, the Support Our Troops Poker Run on Lake of the Ozarks in Missouri has doubled in size, and organizers are expecting an even bigger turnout for this year’s event. 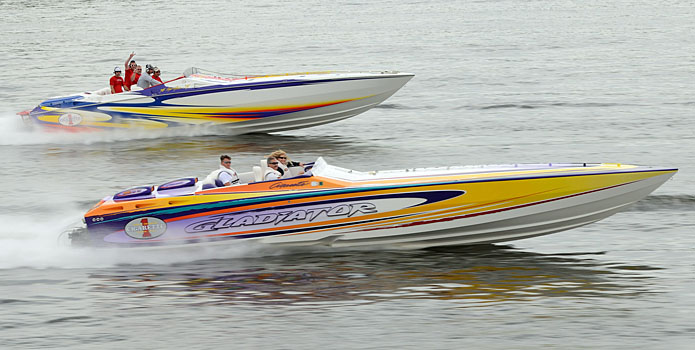 A pair of Cigarette Racing V-bottoms cruise along Lake of the Ozarks during the Support Our Troops Poker Run.Taking place from Thursday, June 21 to Saturday, June 23 (the poker run is on Friday), the event, which is presented by MidwestBoatParty.com, features 10 different card stops on the lake with the option for participants to hit as many or as little as they want.

“You know, the first year we did the event (in 2008), we didn’t know what to expect and we had about 60 boats participate with about 150 to 200 people,” said Ed Champion, marketing director for MidwestBoatParty.com. “The next year we had a good jump and last year we were up over 100 boats with about 450 people on hand.

“We have a 70-mph speed limit for the run, so there’s no race to the bridge or a ‘who got to the first card stop the quickest’ debate,” he added. “The rules are in place to try to keep the flights together a little more. That way everybody gets to see all the other boats and hang out together.”

Shawn Vinson runs his Batman-themed catamaran from Marine Technology Inc. in the Support Our Troops Poker Run.Champion said the event, which was voted the Best Poker Run in the 2011 Powerboat Magazine Readers Choice Awards, has raised more than $55,000 for Operation Homefront, a non-profit organization that provides emergency assistance and morale to our troops, to the families they leave behind, and to wounded warriors when they return home.

“Last year one of the biggest changes we made was that our sponsors got to visit military personnel in their own environment,” said Champion, who gave a special thank you to Vinson Mortgage for coming on as the primary sponsor in 2011. “The visit gave them an opportunity to see how these guys live their lives day in and day out. Then we had the opportunity to thank some of the military members by taking them out for boat rides on the lake.

“Michael ‘Doc’ Janssen even took some of them out in his Super Vee Lite race boat—those guys were in awe,” he continued. “The freedom that we have as boaters stems a lot from what these guys do overseas every day, and this event is just our way of letting them know how much we appreciate their efforts.”

Jon Jerome, who runs Operation Homefront’s local chapter, took the sponsors to Fort Leonard Wood, a U.S. Army installation located southeast of Lake of the Ozarks. Champion said he plans to do the same thing again this year, although the date is still TBA. The event also includes a registration party on Thursday evening at Camden on the Lake Resort and H. Toad’s Bar & Grill and a wrap-up party at the same location on Saturday evening.

For more information or to sponsor the event, drop Champion an email.