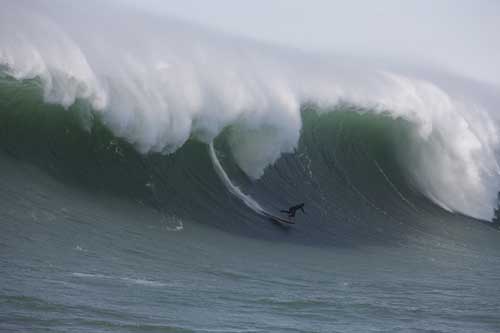 You may know photographer Robert Brown from his work for Powerboat magazine, but the truth is Brown, a friend and colleague, has been shooting big-wave surfing for more than 20 years. In addition to winning numerous Billabong XXL “biggest wave” photography awards, Brown led the first surfing expedition to Cortes Bank, which is 100 miles west of San Diego.

For those of you know who know your geography, that means 100 miles to a reef in the open Pacific Ocean. That day, Brown photographed surfers including Mike Parsons (in photo below) and Brad Gerlach riding huge open-ocean—they were towed in by personal watercraft) waves—the largest of which measured 77 feet tall.

You’d think after that, shooting the 2010 Mavericks Big Wave Contest Feb. 13 at the famed spot off Half Moon Bay, Calif., would be a piece of cake. After all, the waves break on a reef that is only about one-half to three-quarters of a mile—depending on the size of the waves—from shore. Not so, said Brown, who’s photographed the contest before from his 36-foot-long Twin Vee catamaran called U.S. Camera Boat powered by a pair of 275-hp Mercury Marine Verado outboard engines.

“Getting out of Half Moon Bay is, on its own, exciting,” Brown told me. “As you soon as you get beyond the jetties at Pillar Point Harbor, you better know where you’re going because you have these massive ground swells coming through. On Saturday, the ground swell alone was 30 feet. If you take the shorter route out to Mavericks, you have to be prepared to turn around and run to beat a breaking wave. But usually you go south to avoid the reef that’s directly outside the breakwater, then turn right at the buoys and head north. But the thing is, when the surf is that big there’s so much water moving around out there that it’s like running a boat in the rapids.”

Contest organizers and safety officials place buoys near the reef for the media and spectator boats—vessels are not allowed to venture past those buoys during the contest. Brown says he uses the surfers, who in turn use points of land to “triangulate” their positions to be in the right spot to catch the massive waves, to gauge his shooting position.

This year’s contest winner, South African surfer Chris Bertish, reportedly arrived after 36 hours of travel from his native country. His surfboards, however, did not and Bertish had to compete on borrowed equipment.

For Brown, it was the biggest paddle-in surfing—as opposed to watercraft-powered tow-in surfing, he had ever photographed.

“The faces of the waves were 50 feet, easily,” he said. “Last year at this contest, I thought I shot the biggest paddle-in waves I would ever see. This year was bigger.”

When I asked him he if anything unusual happened during the shoot, Brown laughed.

“You can’t have anything ‘unusual’ happen in that stuff—there’s zero room for error out there,” he said. “For me, the big thing is having the second driving station upstairs. When you’re in the cockpit, you’re at water level and you really can’t see what’s coming. From the upper station, you can see enough to have a minute to react rather than seconds. Plus, it gives you a better vantage for shooting. People don’t realize how much hump and bump there is, beyond the waves themselves, with all that water moving around, when it’s that big. You can actually miss a photo because the wave some guy is riding is partially blocked by the mound of water in front of you.”

Editor’s Note: This blog and others by Matt Trulio can be found on his site, speedonthewater.com. Trulio is the editor at large for Powerboat magazine. He has written for the magazine since 1994. All photos in this article courtesy/copyright Robert Brown Photography.