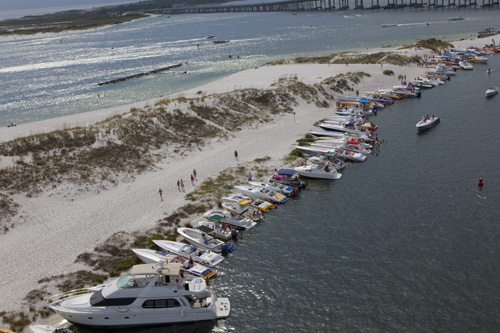 The Emerald Coast Poker Run boats one of the most spectacular setting in the country. Photo courtesy/copyright of the Florida Powerboat Club.

The Emerald Coast Poker Run, which has was held August 13 in the Destin and Fort Walton Beach, Fla., areas raised approximately $140,000 for various local youth charities, according to Stu Jones of the Florida Powerboat Club, which organizes and manages the annual event with the Emerald Coast Foundation. Jones said the amount of money raised is a record for an FPC-run event, and likely a record for all poker runs.

“It meant more to me than anything that we raised this money, especially after I visited some of the local charities and children who benefited in Fort Walton Beach,” said Jones. “For example, I walked into the Eleanor Johnson Youth Center on Monday and 40 children sang a song of thanks to me and my crew for all we did.”

The scenery is a match for the hardware at the Emerald Coast Poker Run.

This year, the run attracted approximately 150 boats. The event has an unusual format in that there is no official course and the boats can leave at any time during the day after the run starts and pick up five cards at more than ten stops.

“I am convinced it is the very poker run in the entire country,” said Brad Schoenwald, who attended the event, of the Tres Martin Performance Boat Driving School.

“It’s nice to know that while hundreds of wealthy and fortunate people are having fun at a major boating event they are, at the same time, enriching the lives of hundreds of less-fortunate children and adults through the fundraising efforts of event management partner, the Emerald Coast Foundation,” said Jones. “It’s an ironic and pleasant twist that makes this event unique among so many others.”

Next year, the Emerald Coast Poker Run will celebrate its 20th anniversary.