Construction of the first Outerlimits SV 29 V-bottom performance boat by Eliminator Boats is scheduled to start next week at the Eliminator facility in Mira Loma, Calif., according to Mike Fiore, the owner and founder of Outerlimits. Once lamination, gelcoat graphics and interior installation are complete, the 29-footer will be transported to the Outerlimits West satellite facility in Fresno, Calif.—the company is headquartered in Bristol, R.I.—for engine installation and rigging.

The stepped-hull SV 29 is the smallest model in the Outerlimits line and the company’s only single-engine offering. 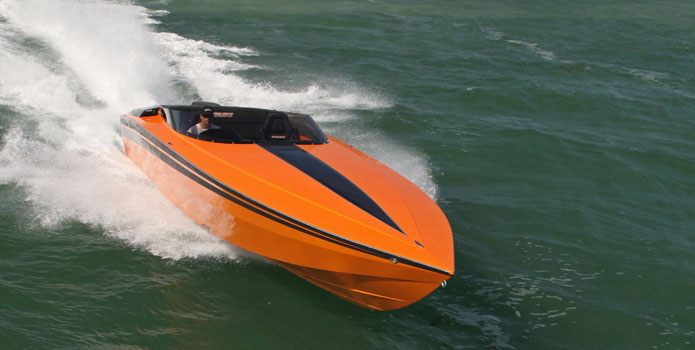 Production of the Outerlimits SV 29, which was introduced at the Miami International Boat Show two years ago, is beginning this month at Eliminator Boats.

“One of my painters is flying out next week so that the people at Eliminator can show us the gelcoat layout process,” Fiore. “Our lamination supervisor is also heading out to oversee the lamination process, and we’re sending out our vacuum-bagging equipment.

“We’re also in the process of sending our new West Coast employees at the Fresno facility to Bristol for training in how we rig our boats,” he added.

Graphics for the first Eliminator-built SV 29—shown here—will be handled in the boat’s gelcoat.

Unlike all other Outerlimits models, which are built with epoxy, carbon fiber and Kevlar and then post-cured, the SV 29 offerings built by Eliminator will be laid up with conventional materials including vinylester resin and fiberglass.

As previously reported (read the story) the contract building agreement between the two companies came out of discussions between Fiore and Bob Leach, the owner and founder of Eliminator boats. While Eliminator will build the 29-footers, they will not be “rebadged” as Eliminator models and will still carry the Outerlimits make and model name.