Despite that the new-for-2022 Dramatized Offshore Racing or the currently for-sale Dependable/Team 10 raceboats are out of the mix for the 37th annual Sarasota Powerboat Grand Prix in Southwest Florida this Sunday, the Super Cat fleet still has a robust seven teams registered. Of those teams, Graydel, M CON, Pro Floors Racing, SV Offshore Racing and WHM Motorsports have seen action this season. All but Graydel, which claimed victory at the May season-opener in Cocoa Beach, Fla., followed a month later by the Lake Race in Central Missouri, have met head to head in the first two American Powerboat Association Offshore National Championship Series contests of the season.

Based in Sarasota, the Justice League team of owner/driver Don Urfer and throttleman Richard Davis will run their freshly wrapped Skater 388 catamaran in the event. Urfer and Davis had hoped to run the cat at the Cocoa Beach, Fla.-season-opener in May, but they simply ran out of time to get the cat, which is powered by 750-hp Sterling Performance engines, ready to race.

The Sarasota race will be their first as teammates in the colorful 38-footer.

The Justice League raceboat is ready for its hometown debut.

“We’re starting in the middle and we’re going to run hard to the first turn, but the main thing is to get comfortable,” said Davis. “Our primary focus is to run all our laps and finish.”

Thanks to a returning sponsor with a full-season commitment, the former Chariots Of Fire Super Cat-class raceboat has been renamed LiquorSplit and has a new look. The Skater 388 catamaran cockpit crew of owner/driver John Emmons and throttle Jimmy McIntyre remains the same, but there have been a couple of seismic changes under the engine hatches. The team replaced its Sterling Performance engines with a new pair of Mercury Racing 860 engines, which starting this year are legal (with a weight penalty) under the American Power Boat Association rules for the class.

At present, the SV Offshore Racing team is the only other Super Cat team running the naturally aspirated, quad-cam four-valve engines from the Fond du Lac, Wis., high-performance marine power and propulsion company.

“We tested a little at Lake X on Thursday and everything was good,” said McIntyre. “The boat ran great right out of the box—Jason Ventura and Andy Carracino at Brand-X Marine did an amazing job rigging the boat.

The LiquorSplit team of John Emmons and Jimmy McIntyre are delighted with their new Mercury Racing 860 engines.

Despite having to take a 950-pound weight penalty for using the 860-hp fuel injected engines rather than the original 750-plus-hp carbureted spec engines for the class, McIntyre said he believes the trade-off will be worth it in the near future.

“I wanted to repower sooner rather than later,” he said. “I didn’t want us to get left behind.”

Tyler Miller, the owner and driver of the M CON team and Super Cat-class representative, described the mood among the teams this weekend as “poised.”

“Everyone is excited to be in Sarasota, excited to have a seven-boat boat field and excited that it is truly anyone’s race to win,” he said. “It’s setting up to be an awesome battle.” 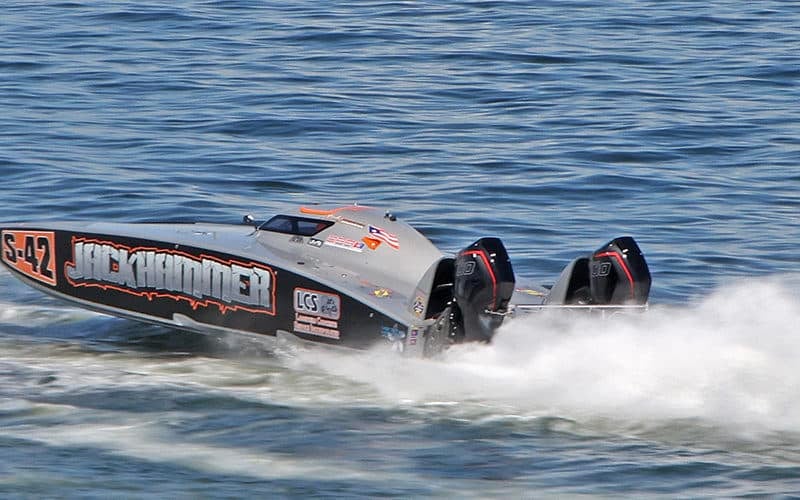 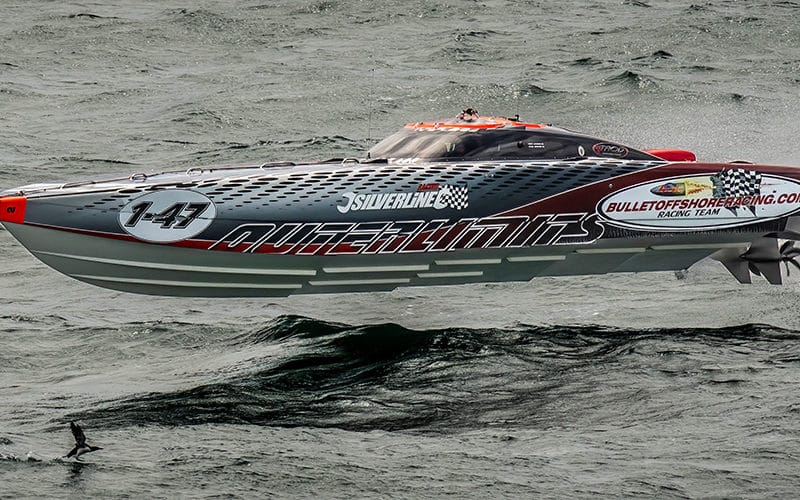