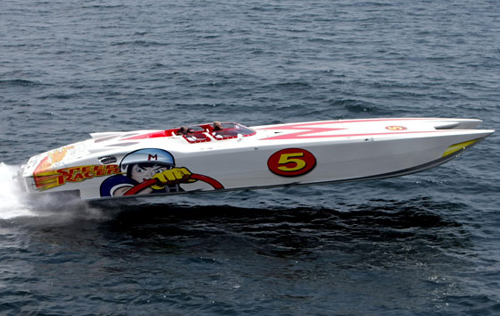 What could be more fun than getting behind the wheel of one of the world’s best-known performance boats? Nothing. Photo courtesy/copyright Tim Sharkey/Sharkey Images.

Several years ago, I got a call from renowned offshore racing throttleman Jerry Gilbreath. Gilbreath, who was throttling a 39-foot Marine Technology, Inc., catamaran called Reliable Carriers with the boat’s owner, Tom Abrams, in the Super Cat class, wanted to teach me how to drive the big cat. In turn, he proposed that I write a story for Powerboat magazine about the experience. I pitched it to Brett Becker, my editor at the time, who agreed to the assignment. I think he knew I would have brooded and grumbled endlessly—two skills I’ve developed well over the years—if he’d said no.

Reliable Carriers was a great boat and Gilbreath was an amazing teacher, but the truth is with a helmet on my head, a full-canopy over it, six-point restraints pinning me to my bucket seat and nothing but flat water in Sarasota (Fla.) Bay and even in the Gulf of Mexico, the experience actually wasn’t nearly as exhilarating as I’d expected it to be. Don’t get me wrong, it was a privilege and it was fun. But it wasn’t the rush I thought it would be.

So when my good friend Bob Christie, the owner of Speed Racer, a well-known 44-foot MTI catamaran with twin 1,000-hp Potter Performance Engines called me and said, “Hey, how about you drive Speed and I throttle for the Miami Boat Show Poker Run,” I was happy to accept. But I didn’t think it would be that big of a deal.

Commentary: Time is the Answer for Production Performance Bo...