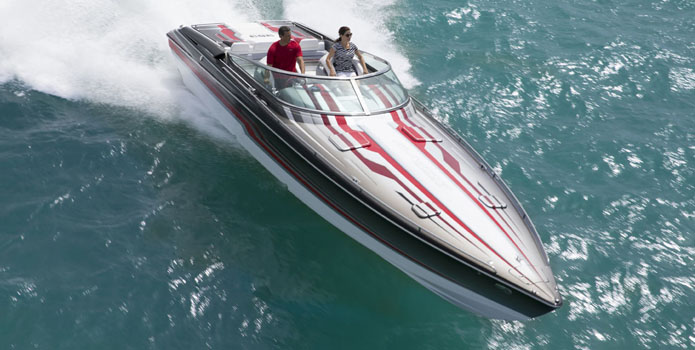 To validate its new MV8 570 engines, Ilmor High-Performance Marine teamed up with industry leader Formula Boats to put the first production pair of the 570-horsepower, LS-based small blocks in the company’s popular 353 FAS3Tech. The project, according to both companies, has been a success and the partnership has extended into joint marketing opportunities, including showcasing the boat at events such as the Desert Storm Poker Run in Lake Havasu City, Ariz.

That’s where I had the pleasure of riding in the boat—for the second time—to get a feel for the 35-footer’s performance with the naturally aspirated engines under the hatch. With Ilmor’s Ian Hawkins and Jason Mast and Formula’s Greg Beer providing the hospitality aboard the 353, we took the stepped V-bottom out on a very choppy Lake Havasu thanks to more than 150 poker run boats and probably two or three times that many spectator boats cruising up and down the Colorado River waterway.

That was the exact experience I was seeking when OffshoreOnly.com asked me to review the boat considering my first encounter with it was the day before the Miami International Boat Show opened and it was a quick ride back and forth along a calm Government Cut section of Miami’s Biscayne Bay. Not to mention the boat and its power plants weren’t even dialed in.