A couple of repeat Midnight Express Boats customers are beyond thrilled with their latest models from the Miami-based boatbuilder—and it’s easy to see why after looking at the two images below of the company’s newest 43’ Solstice models.

Midnight Express took advantage of having both of its new 43-foot luxury performance center consoles in the same location by taking some images of the two Mercury Racing 450R-powered boats together. Photos courtesy Midnight Express

Both of the twin-step 43-foot models, which boast a 12-foot 6-inch beam, are powered by Mercury Racing 450R engines. One of the boats—David Landsman’s Game Changer—has five custom-painted 450R engines, while Jeff Peck’s silver and blue beauty features four color-matched 450Rs on the transom.

“After 14 long months the new Game Changer is finally here,” said Landsman who hails from Maryland and spends a lot of time boating on the Chesapeake Bay, where he hosts the annual Rockin’ The Harbor Poker Run in Baltimore in late June. “A bigger cabin, two panoramic sunroofs and a larger party area in the aft are just some of the new changes. Midnight Express knocked this one out of the park!”

Peck, who is from Miami and is on his third Midnight Express in five years, was just as enthusiastic about his boat.

“Thanks to Midnight Express for building the boat of my dreams,” Peck said. “We imagine it, they make it happen. The cabin is a lot more comfortable and roomy, and the boat has the Seakeeper stabilizer and a lot of awesome little features that make it fit my use perfectly. I can’t wait to start enjoying it with friends and making Bahama trips.”

The business ends of the two latest 43′ Solstice models from Midnight Express.

According to Lesly Fuentes, who works in sales and marketing for the company, Midnight has its second annual Midnight Express Duck Key Rendezvous scheduled for April 30-May 2. As of now, she has 20 Midnights committed with room for more if any other Midnight owners are interested.

Any questions about the event can be addressed to Fuentes, who said the group will take off from Haulover Marine Center in Miami and head to Hawks Cay Resort in Duck Key. 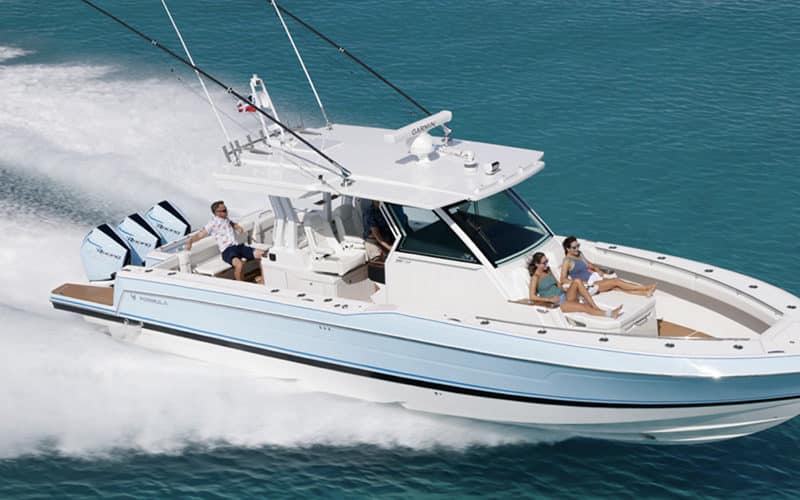