by: Written by Tank Sears 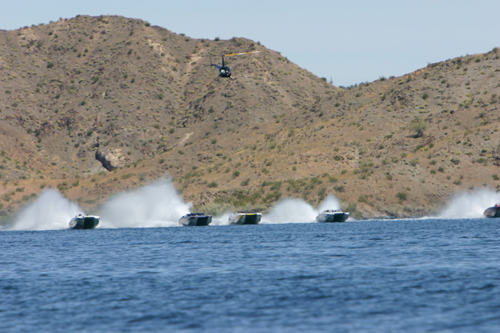 With a fleet of what could be 200 boats in 2012, the poker run is the showpiece event of Desert Storm.

There’s plenty of news coming out of the Lake Racer LLC offices, where Jim Nichols—event co-founder and organizer of the Desert Storm Poker Run—is working hard on this year’s high-performance boating extravaganza slated for April 21-30. That’s right, a full ten days of all the high-performance boating fun, and probably a little more, you can handle.

This year, Nichols and his team including title sponsor Bob Teague of Teague Custom Marine opted to hold the poker run to coincide with the the Lake Havasu Boat Show. Scheduled for April 21-23, the event will showcase new boats and product from vendors from across the nation.

Desert Storm will feature an offshore race sanctioned by the Pacific Offshore Powerboat Racing Association and water ski racing by the National Water Ski Racing Association. Also included in the weekend show will be the “Legends by the Lake” car show featuring more than 200 “Woodies”, street rods and other classics, plus an array of restored V-drive flatties, hydros and jets boats.

“We worked hard this year to join the Lake Havasu Boat show to the poker run,” said Nichols. “This will not only create a longer event but a better one, enhancing the kind of boats and manufacturers in attendance.”

The annual Street Faire attracts thousands of visitors and features high-performance powerboat displays from builders around the country.

On Thursday, April 26, the famed Desert Storm Street party kicks off at noon. Industry leaders, poker run enthusiasts and various venders converge on Lake Havasu City’s McCulloch Boulevard to give fans and enthusiasts a firsthand look at products and poker run teams as well as the ability to speak with industry icons while perusing more than a mile of boating-related eye candy.

The next day, the poker run kicks off after the mandatory drivers’ meeting at famed poker run village. The village which transformed the the golf course of the Nautical Inn—Desert Storm’s host hotel—into a collection of event sponsor tents, tow vehicles, display boats and an enormous entertainment stage. Nichols said he expects up to 200 boats to participate in the run.

Aborted last year thanks to blustery conditions that included wind gusts up to 35 mph, the Desert Storm Shootout returns on a two-mile course on April 28. The “King of the Desert” remains to be crowned and, conditions allowing, that will happen in 2012.

The spectator fleet during the Shootout is substantial.

Editor’s Note: Tank Sears will contribute updates on Desert Storm on speedonthewater.com as they develop.