Jim Nichols, the driving force behind the Desert Storm Poker Run, always finds a way to bring a new wrinkle to the popular event. With less than 30 days to go until the 10th annual Desert Storm Poker Run (April 24-27) rolls into Lake Havasu City, Ariz., Nichols informed speedonthewater.com that he’s adding an aerobatic show to the festivities. 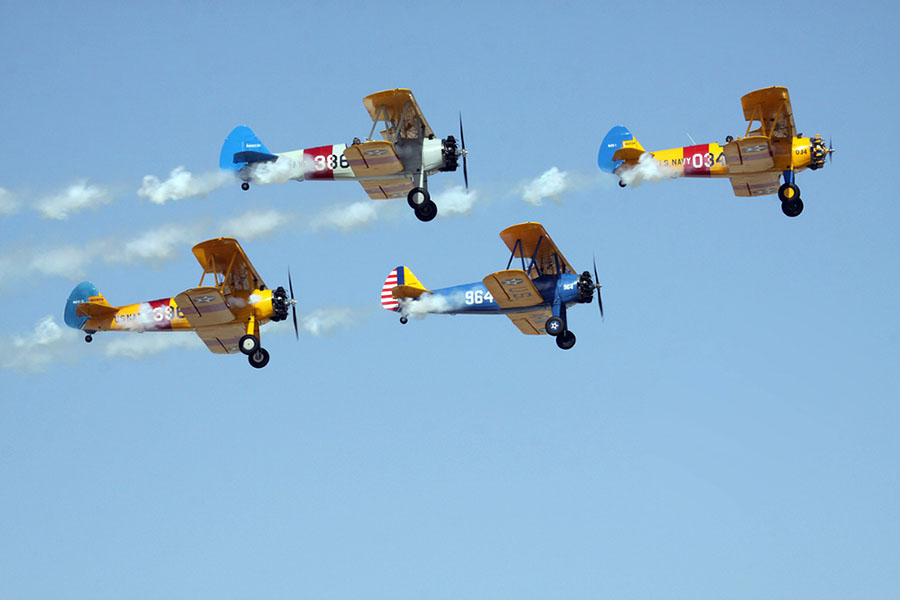 This year’s Desert Storm Poker Run will include a biplane aerobatic show during the shootout portion of the 10th annual event.After all the hoopla of the children’s charity boat rides on Wednesday, the jaw-dropping boat show and street party on Thursday and the poker run on Friday, Saturday’s top-speed shootout event also will include an air show featuring at least three Boeing Stearman biplanes.

“We’re adding the air show to the shootout for the noon-time break in the action,” said Nichols, who is excited about the exhibition since he’s been fortunate enough to fly in one of the unique planes. “It’s something to keep the crowd happy and entertained while we feed our safety boats and give them a break. I hope everyone at Desert Storm enjoys these World War II trainers as much as I will, as we bring something new to the event.

“Having grown up around the Casa Grande Arizona Airport, one of my favorite memories is flying in an open-cockpit plane and seeing the sky and ground change places while doing a spin or a loop,” added Nichols, who said he has three Stearmans confirmed for the show and is working on getting a fourth plane. “Even as I found another passion in the freedom of boating, it was always a love of mine to watch an aerobatic show, whether it was the U.S. Air Force Thunderbirds in Reno, Nev., or Art Scholl in his Super Chipmunk putting on a special display for our friends in Maricopa, Ariz. These birds are going to be fun to watch.”

Editor’s note: Speedonthewater.com will continue to provide Desert Storm coverage leading up to and throughout the event.