Your go-to source for performance boating.
HomeMattBlogDesert Storm Off the Charts

Desert Storm Off the Charts

Desert Storm Off the Charts 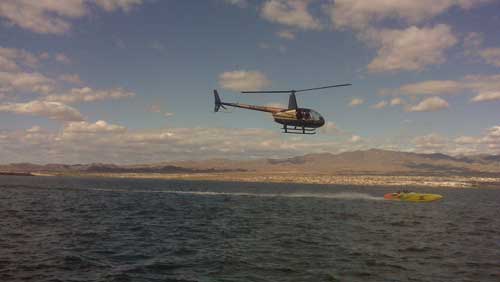 It’s 4 a.m. on Monday, April 26, in Lake Havasu City, Ariz. In a little more than an hour I need to be on the launch ramp at the Nautical Inn to begin a day of boat testing with Bob Teague, John Tomlinson, Jason Johnson and the rest of the Powerboat magazine crew.

Overwhelming odds are the launch ramp will be deserted save for the six boats we’re testing today. What a change from the past four days of Desert Storm, a simply massive event that combined a poker run, a street fair, a top-speed shootout and an offshore race—and threw in more than a little charity fund raising in the process.

There were 40-something entries in the shootout, the fastest being the 50-foot-long JBS Mystic catamaran that posted a top speed of 175 mph in its “official” run, and 187 mph in its “unlimited” run.

The much-anticipated shootout battle between poker-run/speed-chasing rivals Bill Pyburn in his Skater 388 and Gino Gargiulo in his 44 MTI didn’t materialize, as mechanical issues sidelined Gargiulo early in the poker run. Pyburn did manage to post the second-fastest shootout speed for a piston-engine boat at 156 mph in his one and only run. But that was 1 mile per hour shy of the 157-mph run laid down by Chip Romer—who lives in Lake Havasu City—and John Tomlinson in Romer’s 388 Skater.

Quick note on the shootout speed numbers: Though I am sure of the results, I did not have an “official” list of speeds as of this morning. I will verify the speeds I’ve quoted as soon as that information becomes available and make corrections if necessary.

Desert Storm is quite simply the biggest event in the high-performance powerboat world. I can back that statement any number of ways, from the size of the poker run and the quality of the fleet to the thousands of performance-boat enthusiasts who filled this town.

I could go on and on with the name-dropping—further nauseating you in the process—but the point is this: These people would not have been here if Desert Storm weren’t a hugely important (i.e. commerce-driving) event. Only at the Miami International Boat Show could you find this kind of grouping of performance- industry notables.

Of course, they’re gone now. All that’s left is the Powerboat crew and me. Which reminds me that I need to get in the shower and then head for the ramp. At least it won’t be jammed.

Editor’s Note: Full coverage of Desert Storm complete with photos will appear in the next issue of Powerboat magazine.

On The Road To Desert Storm