Your go-to source for performance boating.
HomeIn the NewsDegree Men to Sponsor No. 88 Unlimited Hydroplane

With yesterday’s announcement that Degree Men will be the new title sponsor of the USA Racing Partners’ No. 88 boat in the Air National Guard H1 Unlimited Series, things seem to be looking up for the Unlimited hydroplane circuit, which feature six races on the 2012 schedule, starting July 6 in Madison, Ind. 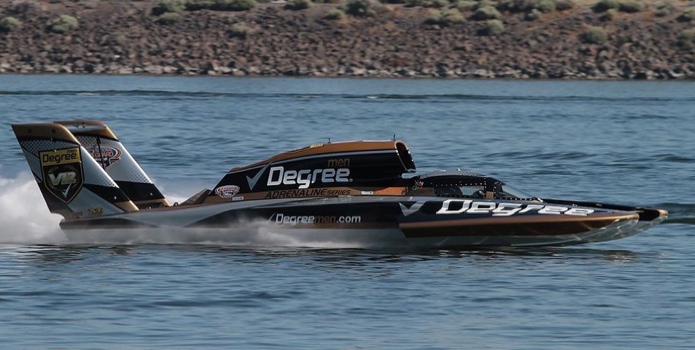 Degree Men returns as the sponsor of the No. 88 boat for the 2012 H1 Unlimited Series.

Not only is Degree Men beginning its third season sponsoring a top-flight H1 team, but the team it will be supporting—USA Racing Partners—is returning to the sport after a three-year break. After the loss of USA Racing founder Kim Gregory in 2008, the team stepped away from the sport. Tragedy struck again in 2010 with when David Bryant, who was the 2007 Rookie of the Year in the team’s boat, died in an unrelated racing accident.

The team, which was founded by Gregory and his wife, Debbie, in 1998, has enlisted 2011 H1 Unlimited Rookie of the Year Scott Liddycoat to drive the Degree Men boat. And the 19-year veteran of inboard racing is thrilled to take the wheel.

“I was extremely excited when the USA Racing Partners asked me to become part of their family,” Liddycoat said. “I am honored to represent USA Racing, along with our sponsor Degree Men for the 2012 H1 Unlimited Series.”

USA Racing’s Matt Gregory will lead the charge as the team’s crew chief with Adam Gregory serving as the team’s VP of operations and Debbie Gregory as the president/owner.

“Featuring 3,000 horsepower and speeds in excess of 200 mph, the H1 series is unmatched on the water for delivering adrenaline-pumping speed and thrills with every turn,” said Ernie Hoover, Unilever U.S. Customer Marketing Director – Personal Care. “This makes H1 a perfect fit with the Degree Men ultra-premium Adrenaline Series anti-perspirant/deodorant line. We’re excited to have USA Racing Partners as our new team and 2011 UIM World Champion Scott Liddycoat onboard as our driver.”

Sjogren on Restorations: ‘People are always looking for valu...