The highly anticipated M41 Widebody catamaran from Dave’s Custom Boats (DCB) is still a few months from being ready to hit the water, but the crew at the El Cajon, Calif., company is energized because the 41-footer is really starting to come together. 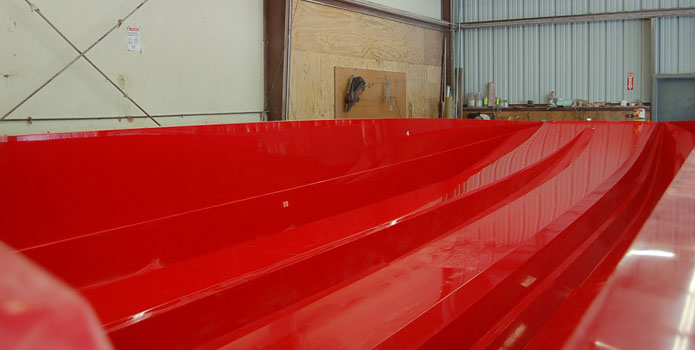 “We’re on the downhill slide now,” DCB’s Tony Chiaramonte said last week. “We popped the bottom mold yesterday and the deck mold is almost finished, we’re just finishing some caging. We are still tidying up the inner liner, the hatch molds and some of the other intricacies, including patterning the fuel tanks and other components.

“We want to have this first one done by August in time for the Big Cat Poker Run (in California) or the Lake of the Ozarks Shootout (in Missouri),” he added. “The first one will have a pair of Mercury Racing 1350s. We will be building the first three M41s with twin 1350s.”

DCB will be busy spraying the first boat starting this week. Knowing some of the size limitations at the DCB facility, I asked Chiaramonte if the company is going to make any changes to accommodate building the 41-footer. He said they have a handful of expansions planned, including pushing out the lamination shop and the spray booth by at least 10 to 12 feet. He also said finishing the M41 is the company’s No. 1 priority at the moment.

Check speedonthewater.com for future updates on the progress of the M41 Widebody from DCB.