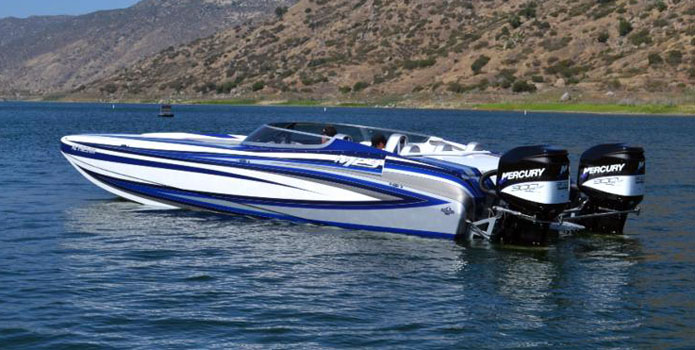 On his drive home from delivering the company’s first completed M29 catamaran, Dave’s Custom Boats’ Tony Chiaramonte said customer Jim Watters was impressed with the 29-footer and its twin 300-hp outboard engines after taking the boat out on Arizona’s Lake Havasu.

Watters, who owned two catamarans from the El Cajon, Calif., builder—an F29 and an M35 Widebody—before ordering the first M29, is hauling the boat to Lake Powell, another Colorado River lake that sits on the border of Arizona and Utah, which is where he will keep it. With an elevation above 3,000 feet, Watters asked the crew at DCB, who tested the boat for nearly a week on El Capitan Reservoir outside of San Diego, to set the boat up for acceleration and overall fun factor not just top speed. 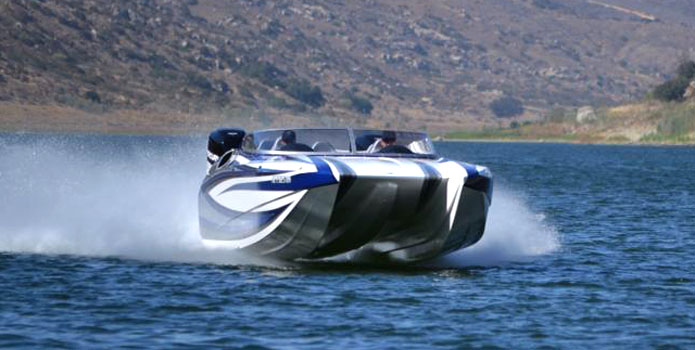 The new M29 from DCB ran flawlessly during a recent test run.The twin Mercury Racing OptiMax 300XS outboards were set up with a 1.62:1 gear ratio and the 25-inch shaft lengths, which run around 400 to 500 less rpm than the 20-inch models. Equipped with twin Mercury Bravo 31-inch-pitch propellers, the model reaches its top speed—a cool 90-plus mph, according to Chiaramonte—with little effort.

Chiaramonte, who said the boat starts at $225,000 with the twin outboards, called the boat “flawless,” pointing out that 29-footer jumps right on plane, takes every turn perfectly and doesn’t porpoise at any point.

With the second M41 Widebody next in the production line, Chiaramonte said the next two M29s, which have been ordered with a single turbocharged Mercury 1350 engine and twin Mercury 565 power plants, should be completed over the next few months.