Your go-to source for performance boating.
HomeIn the NewsDCB All Set for Barrett-Jackson and Next Month’s L.A. Boat Show

DCB All Set for Barrett-Jackson and Next Month’s L.A. Boat Show

DCB All Set for Barrett-Jackson and Next Month’s L.A. Boat Show

A couple of models from Dave’s Custom Boats (DCB) are already in place awaiting the opening day of Barrett-Jackson, aka the world’s greatest collector car auctions, in Scottsdale, Ariz., this Sunday. The company’s hot-rod-red M41 Widebody and a customer’s recently finished M35 Widebody will be part of the vendor marketplace at the 43rd annual Scottsdale Auction. 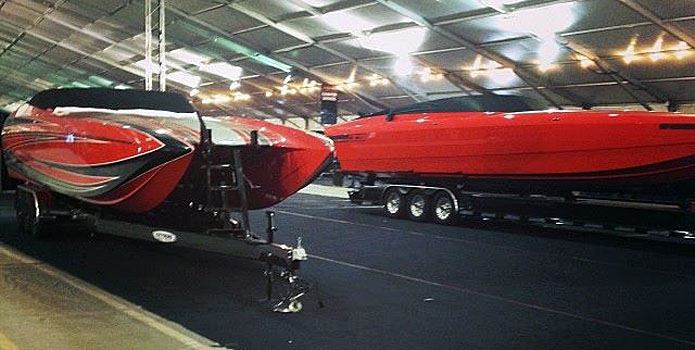 Two Dave’s Custom Boats Widebody models—an M35 (left) and an M41—are in Scottsdale, Ariz., where they will be on display starting Sunday, Jan. 12 through Sunday, Jan. 19 in the Barrett-Jackson vendor marketplace.

The boats, which are not up for auction, will be on display from Jan. 12-19 at an all-new location, Westworld of Scottsdale—a facility that boasts nearly a million square feet of auction facilities, vendors and nonstop entertainment.

After Barrett-Jackson, Hemmingson said DCB’s next stop is the Los Angeles Boat Show (Feb. 6-9) at the L.A. Convention Center. After missing the L.A. show to participate in the Miami International Boat Show the past few years, DCB plans on having the M41, a new M35 and a new M29 on display in downtown L.A.

The company won’t have any models on display in Miami this year, although Win Farnsworth, who owns the first M41, is planning to participate in the Florida Powerboat Club Miami Boat Show Poker Run (Feb. 20-23) after doing the run last year with his new ride.