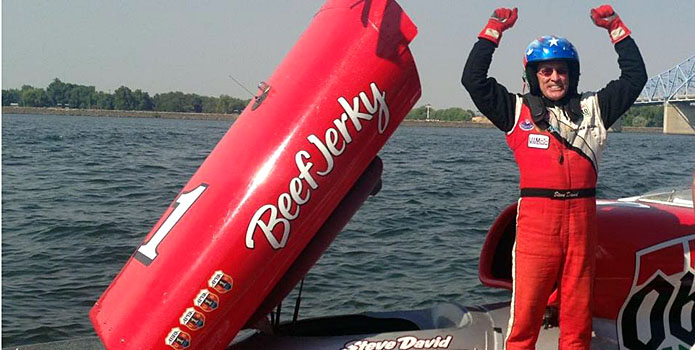 For H1 Unlimited defending national champion Steve David in the Oh Boy! Oberto boat and defending Lamb Weston Columbia Cup champion Jimmy Shane in the Graham Trucking boat, the 2013 Columbia Cup race in Washington’s Tri-Cities area was all about a “fight for lanes” before the start.

Neither driver was able to win from the second lane when the two were in the same heat, and when David got the inside for the final, it was enough to make the difference and return the Madison-Ind.-owned team to the top of the podium in Kennewick, Wash.

In the final, Shane stayed on David’s hip the entire five laps, but David built a two-second lead by the end of the third lap and kept that advantage to the checkered flag. A minute before the start, David was in the third lane, outside Spirit of Qatar driver Kip Brown in lane one and Shane in lane two.

“We put in the acceleration package and it paid off,” said David, who moved into lane one at the start and held on to win for the fourth time on the Columbia River—he won three straight Columbia Cups from 2008-2010. “I was able to get the overlap on Kip and Jimmy and take the lane. Jimmy is the future of the sport and he is really fast. That team gives him a great boat and he is going to be out front for a long time.”

Brown arrived at the score-up buoy too early and was penalized back to seventh place, while Jon Zimmerman in the Fox Plumbing presents Team RedDOT boat got the third spot on the podium. Two boats flipped during heat racing over the weekend. For more details and to check out the photos, visit the Tri-City Herald site.

David came into the race with a 183-point lead over Shane in the national high points standings. The Lighthouse Point, Fla., driver extended his lead an additional 50 points by winning Friday’s qualifying session with an average speed of 158.766 mph and he left with a 223-point advantage heading into the next round of the series—the Albert Lee Cup at Seattle’s Seafair on Lake Washington this weekend (Aug. 2-4).