As the saying goes, the apple doesn’t fall far from the tree. And in the case of Australia’s Warby family, that is 100 percent true as David Warby, the son of Ken Warby—the legendary boater who built and drove his Spirit of Australia boat up to 317 mph in 1978 on Blowering Dam in New South Wales—is setting out to break his father’s Outright Unlimited World Water Speed Record in the near future.

Currently soliciting sponsors and promoting a crowd-funding campaign called Help Dave Smash His Old Man’s Record (check out the video promotion the campaign at right) to raise money for the attempt, the 50-year-old David Warby is confident he’s going to set a new record by the end of this year or early next year. He and an incredible team of volunteers have been testing the boat incrementally in anticipation of the attempt on the same waterway. In fact, David’s ambition is to shatter his father’s record with a speed of 560 kph, which is approximately 348 mph.

“Growing up as a kid, I watched my father build a boat in our backyard—not in a workshop—to take on the world and beat the world record not once, but twice,” said David Warby, who built Spirit of Australia 2, a 28-foot jet-powered boat, with help from his father and many people who were involved with his father’s attempts four decades ago. “That’s my inspiration. I grew up around it all my life. I’ve raced and built my own boats, and my dad’s record is the holy grail of performance boating, in my opinion.

“For me, having the guy who did all this next to you is a blessing,” he continued. “Of course, being father and son, we give each other crap all the time, but we work well together and we really plan out what we’re doing. None of what we do is a knee-jerk reaction.”

The Spirit of Australia 2 boat features the latest and greatest in technology and safety equipment.

In support of the team’s bid, Warby Motorsport recently announced a partnership with Road Tech Marine. David Warby said the team is looking to engage partners with synergetic views, and that RTM, which is a specialist marine tech store that carries many of the parts and specialty equipment the team needs for the boat, was a natural fit. The local RTM store in Newcastle is frequented regularly by the team in its bid to ensure all safety measures are met and modifications can be made. 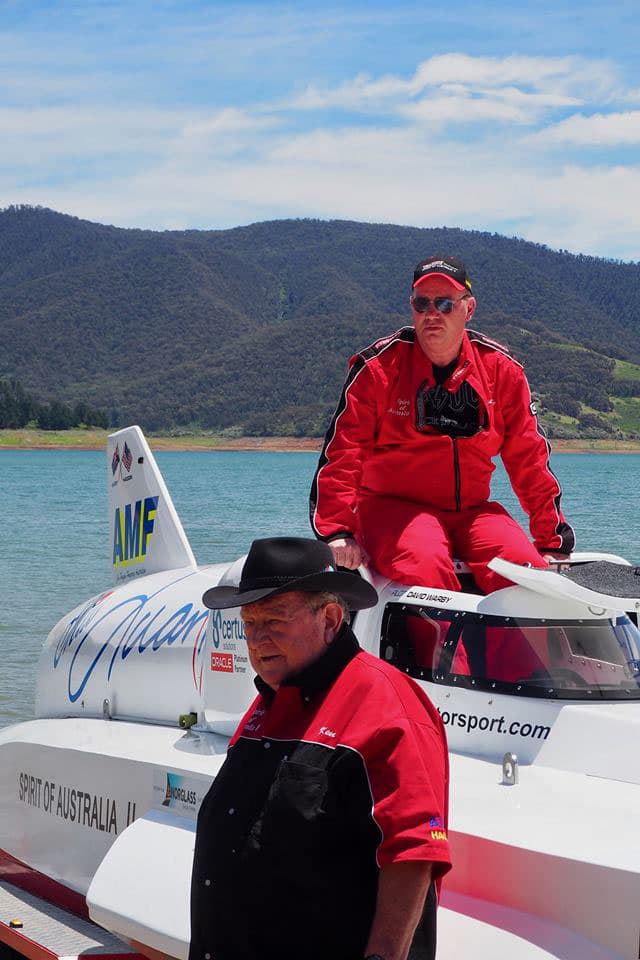 “It’s all about slowly building up the speeds and continuously testing the boat and her responses to our modifications as we push her faster,” said David Warby, who has tested the boat several times and has ran it faster than 200 mph. “RTM brings an extra level of expertise, trust and network to our team to ensure safety during speed trials.”

A relative newcomer to the marine and road enthusiast market, RTM was started in 2013 by Gary Johnston following the success of his JAYCAR specialist electronic stores.

“I watched intently when Ken Warby crucified Donald Campbell’s record back in ’77 and set the current world record in ’78,” Johnston said. “I am now delighted to come on board as a major sponsor with RTM. RTM specializes in providing solutions for all marine expedition and road-trip needs and we do mean all, having developed specialist solutions for the record attempt with Spirit of Australia II.”

“I feel like we have all the right things in place to put a record-breaker on the water,” David Warby said. “I know the boat is a lot safer than the one my dad drove. He didn’t even have a seat belt and we have a six-point harness, the latest and greatest safety capsule, better communications, not to mention a more powerful engine.”

If it does happen, the boat is going to be displayed alongside the original Spirit of Australia at the national maritime museum for the entire world to see.

Editor’s note: If you’d like to help the team in its effort to break the record, donate to its crowd-funding campaign here.